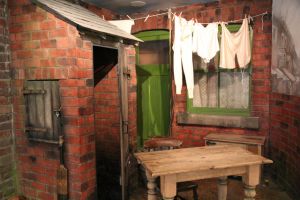 National Coal Mining Museum for England
This is a hands-on, or perhaps I should say, a hands-under museum. You descend 450 feet under the ground to experience for yourself the life of a miner from 1820 to the present day. Be warned: it gets cold underground; dress warmly and wear sturdy shoes. For the claustrophobic there are above ground displays and videos.
History
The museum is based at the historic Caphouse Colliery in Overton, near Wakefield. The colliery began in the 1770s and became Denby Grange Colliery in 1827 when Sir John Lister Lister Kaye of Denby Grange took over the lease. Many of the mining buildings erected by the Lister family owners are preserved, and are listed for their historic interest.

Among the Victorian buildings that form part of the museum are the original steam winding engine house, boiler house, boiler yard, chimneys, and ventilation shaft. The colliery closed in 1985, but it was only a matter of 3 years before it reopened as a museum of Yorkshire mining history. In 1995 the scope of the museum was entended to take in mining heritage across all of England.

The above ground visitor centre includes exhibits on the industrial history of the Caphouse site and the social history of mines and mining in Yorkshire. Explore the medical centre, and the 1842 gallery that shows in vivid detail what life was like for Victorian miners.

The Mining Lives exhibit shows how the miners and their families lived. At the Hope Pit exhibit you can see restored colliery buildings, with interactive models to help you understand how the miners extracted coal from deep below ground.

There is an extremely large archive of documentary material including photos, posters, and old issues of 'Coal News'.

Museum highlights include the original colliery buildings, including the pit head bath house, coal screening area, and steam winding house. See a recreated miner's house yard, with its outdoor privy and clothes hanging on the line. Say hello to retired pit ponies, follow a nature trail, and ride a 'paddy train' that carried workers to the colliery. The train was so-named because many of the workers wee Irish immigrants.

You'll come away with an appeciation of the difficult and often dangerous life of miners, not just in Yorkshire, but across Britain.

More self catering near National Coal Mining Museum for England >>