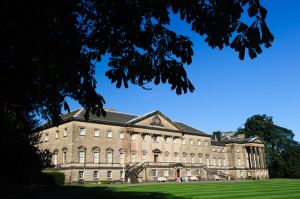 Nostell Priory is a glorious 18th-century country house with interiors by Palladian master architect Robert Adam. The house was built in 1733 to a design by James Paine. Robert Adam was called in to expand and renovate Paine's work in 1766, and over the next 19 years, he created a marvellous neo-classical house.

The house takes its name from medieval Nostell Priory, an Augustinian monastery founded in 1114. The monastery was dissolved by Henry VIII in 1540. The monastic site is near the current house, but there is very little to see beyond the 17th-century cow stalls, which were converted from monastic outbuildings.

Nostell Priory stands 2 stories high, with a centre block of 5 bays. The interiors are mainly by Adam, with furniture designed by Chippendale specifically for the Priory. There is an extensive art collection, with paintings by Angelica Kauffman and Breughel, among others. The library is considered one of the best at any National Trust property.

The landscape gardens were laid out by Stephen Switzer, and stretch to over 300 acres. One of the most intriguing features of the garden is a pond formed out of a former cockpit. The high banks surrounding the pond retain the turf seating used by spectators at cockfights.

I was fortunate enough to be part of a special guided tour of the house interiors. To say that I was awe-struck is an understatement. The plasterwork detail and interior room decoration by Robert Adam are simply stunning. Adam's attention to detail is immaculate, and every surface seems carefully planned to blend into the next. The artwork is superb, and I was especially struck by Brueghel's painting of the Procession to Calvary (c. 1602).

One of the most talked about pieces of furniture is The Dolls House, crafted by master furniture maker Thomas Chippendale between 1730-1740. Never has a dolls house looked more like fine furniture!All in all, Nostell Priory is a magnificent example of an 18th century stately home, with some of the finest interiors in the country. Highly recommended.

More self catering near Nostell Priory >>

The Old Deanery is a Hotel Restaurant and Bar located directly opposite the stunning Ripon Cathedral in the market town of Ripon North Yorkshire. Our historic building dates back to 1625 so if you're looking for something that little bit different; you won't be disappointed. With 11 unique rooms and … more >>