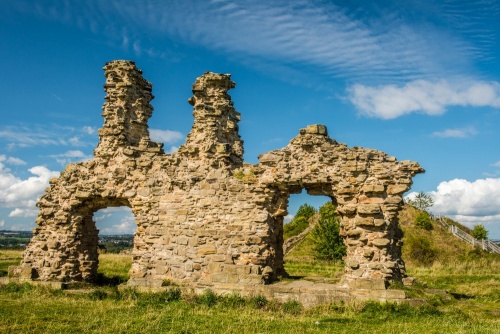 Sandal Castle is a motte and bailey fortification on the outskirts of Wakefield, Yorkshire. The castle was probably erected early years of the 12th century. Its moment in the spotlight of history came in 1460, during the Wars of the Roses, when the Battle of Wakefield was fought nearby.

The castle was one of two built to defend a crossing point of the River Calder at Wakefield. The other castle, on Lowe Hill, can be seen from Sandal. The first record of a castle at Sandal comes in 1240, but it seems certain that the castle was actually begun in the 12th century.

The castle builders were the powerful Warenne family, Earls of Surrey. The first castle was built of timber. The timber fortification was replaced in stone from the 13th century. Much of the castle ruins we see today was the work of the Warenne owners.

The castle may have suffered an attack in 1317 but the circumstances are unclear. We do know that the castle was in royal hands by 1361. Unfortunately, the crown did a poor job of keeping the castle in repair, and it began to decay during the late 14th century. 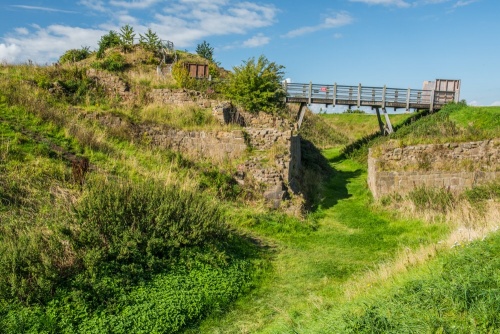 The Gatehouse from the bailey ditch

The Battle of Wakefield

In 1460 Sandal Castle was at the centre of the long, bloody conflict between the Houses of York and Lancaster known as the Wars of the Roses. Richard, Duke of York, held the castle when a Lancastrian army marched from nearby Pontefract Castle and approached the low-lying plain that spreads out below Sandal. Duke Richard rashly did not wait for his troops to fully assemble and left the castle high ground to launch an attack. It was a bold move, but one that backfired badly.

The Duke of York was killed in the battle, but the Lancastrians failed to press home their advantage. Duke Richard's son, Edward, defeated the Lancastrians in the bloody Battle of Towton the following year and took the throne as Edward IV.

It is sobering to look down on the battlefield site from the castle mound. Today the site is little more than peaceful farm fields, but on 30 December 1460, it was a place of death and destruction. Sandal Castle's role in the Wars of the Roses was not forgotten by Shakespeare, who set scenes from his play 'Henry VI' here.

Edward IV's brother Richard made Sandal Castle his major power base in the north of England. When Richard came to the throne as Richard III he strengthened the defences and at the same time made the castle more comfortable as a residence. He built a polygonal keep tower and added a bakehouse. The walls of both buildings still stand in places.

After Richard's death, the castle went into decline once more. The castle was held by the crown during the Civil War, but after a siege by Parliamentary forces was successful the castle was slighted to make it militarily useless.

Stone was systematically removed, leaving just a few fragments of walls and the base of the medieval barbican. The imposing earthwork motte and bailey remain, however, as a testament to just how large and impressive the castle must have been in its heyday. 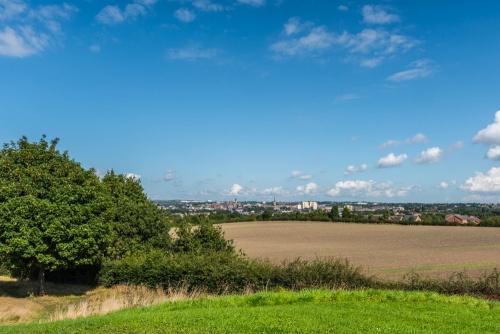 The Battle of Wakefield battlefield site

The main earthworks include an impressive motte rising 15m high with a base some 40m across. The motte stands at one end of a crescent-shaped inner bailey measuring roughly 60m x 25m. The motte is separated from the bailey by a deep ditch that measures 15m wide and is 5m deep.

The Larder and Kitchen

Beside the lodging chamber stands the remains of the larder, a single storey 13th-century building for food storage. The larder was later extended with a second-storey chamber that may have been used by an alchemist. Excavations in the moat outside this building unearthed a large number of glass and ceramic vessels and the chamber seems to have had several hearths. 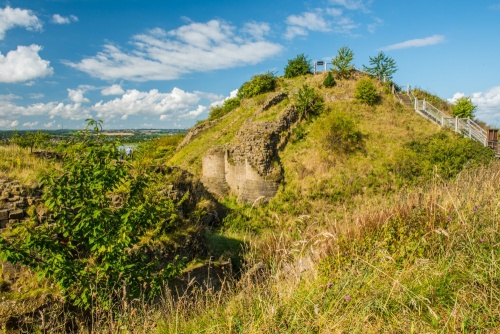 Remains of the Keep and castle motte

Near the Barbican are remains of a bakehouse built by Richard III, where you can still see evidence of a large oven. Beyond the bakehouse, at the bottom of the moat, is a doorway that may have been intended as a sally port, a secret exit for escaping a siege or for launching an attack on an unsuspecting enemy. 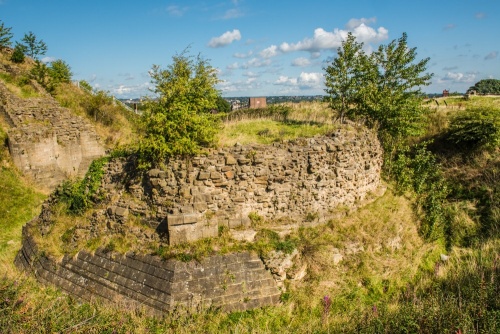 Sandal Castle is well signposted from surrounding roads. Access is off the A61, on the southern edge of Wakefield.

The castle grounds are open to the public daily throughout the year. There is limited parking on-site, and guided tours can be arranged. Artefacts found during excavations on the site can be seen in the Visitor Centre and at the nearby Wakefield Museum, on Wood Street. There are wonderful views of the Calder Valley from atop the castle mound.

When we visited in late summer the footbridge across the encircling bailey ditch was closed due to safety concerns, as was the modern set of stairs leading to a viewing platform on top of the motte. It was still easy to cross the earthwork ditch and climb up into the bailey, and, with some effort, climb the steeply sided motte to the top for fabulous views over the Calder Valley and the Battle of Wakefield site below. 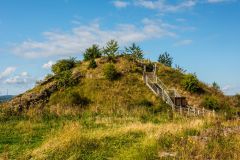 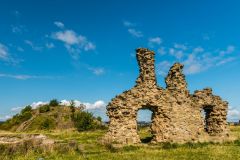 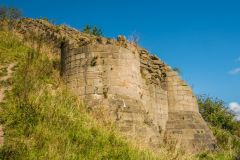 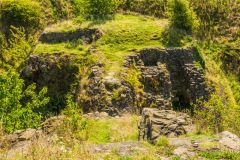 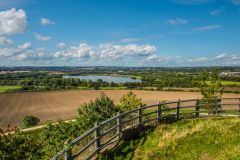 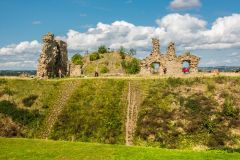 More self catering near Sandal Castle >>