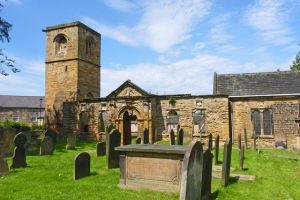 Wentworth, Holy Trinity Church
The partially ruined 15th-century church of Holy Trinity in Wentworth paints a peculiar picture, with a roofless nave standing between a large 17th-century chancel and a truncated west tower. The core of the church is built of rubble sandstone and the tower of ashlar.

The church dates back to at least the 12th century, but much of the current building is from a rebuilding in 1491, during the last flowering of the Perpendicular style of architecture. It was later extended in 1684 by the 2nd Earl of Strafford in memory of his wife, Henrietta Stanley, whose initials can be found throughout the chancel. Lady Henrietta's memorial is set upon the wall.

Strafford's chancel is the most interesting feature of Holy Trinity. In addition to Lady Henrietta's memorial, it contains a wonderful variety of Wentworth family memorials dating back to 1548. The most famous Wentworth represented here is probably Thomas, the Earl of Strafford (d. 1641).

The unfortunate Earl was a staunch Royalist and a key advisor to King Charles I. He paid for his support of the king by losing his life, executed for treason on Tower Hill in 1641. Apart from these monuments to the great and good, there are numerous memorials to those who acted as servants to the Straffords, whose family seat of Wentworth Woodhouse stood at the end of the village.

One amusing curiosity can be found in the churchyard. Look for the gravestone of William Cooper (d. 1781). Cooper must have anticipated that his gravestone would eventually fall over, so he had a message inscribed on the back of the stone that reads, "For goodness sake Fix this stone up again." It must have worked, for the stone is indeed upright.

Also in the churchyard is the entrance to an underground burial vault, built by William Wentworth Fitzwilliam and his son Charles William John Wentworth Fitzwilliam, in about 1824. The vault was intended to hold 30 bodies, but in fact, holds only 8. The fact that the first burial was a stillborn infant was thought to be a bad omen, and the vault quickly fell out of use.

Holy Trinity is no longer in regular use and is cared for by the Churches Conservation Trust.