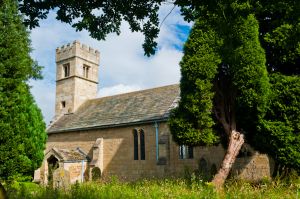 Built sometime around 1456 for Sir Bryan Roucliffe, this Perpendicular church has remained largely unaltered since the 15th century despite a sensitive Victorian restoration. The most immediately striking feature of St Michael's is the tall embattled tower, which looks more like a castle fortification than a religious symbol. The style of the tower is reminiscent of military gatehouse construction in the 15th century.

The church consists of a small nave, even smaller chancel, south porch, and west tower. It is built of coursed sandstone, ashlar, and limestone beneath a slate stone roof. On the west face of the tower base is a huge Perpendicular arch, which seems more suited to a cathedral than a small country church.

The most interesting historical feature is a magnificent Easter Sepulchre, built for the Roucliffe's. Nearby are the partial remains of a Roucliffe family memorial. In the choir is a memorial brass showing a man and woman in 15th-century costume. Between them, they hold a model of Cowthorpe church, by which we can guess with some certainty that the brass commemorates Sir Bryan Roucliffe and his wife.

Another highlight is the wonderfully carved 15th-century font. This is incised with the arms of Lord de Ross, the Plumptons, and the Hammerton families. There are fragments of medieval heraldic glass in the Perpendicular windows.

There are three bells, and one commemorates Sir Bryan Roucliffe and appears to date to the construction of the church or shortly thereafter. The inscription on the bell is in English, one of the earliest such dedications not in traditional Latin. A tradition, which unfortunately cannot be proved or disproved, says that Guido Fawkes (Guy Fawkes) grew up in Cowthorpe and would have rung these self-same bells in St Michael's church.

St Michael's church is no longer in regular use and is cared for by the Churches Conservation Trust who generally keep it open. 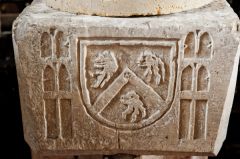 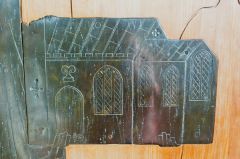 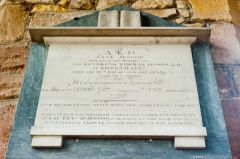 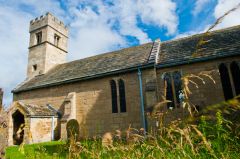