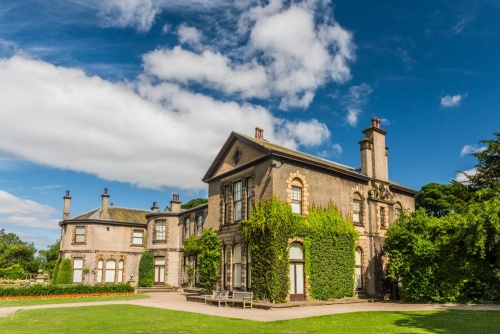 Lotherton Hall is a beautiful Edwardian mansion in a countryside setting ten miles east of Leeds. The house incorporates an earlier Georgian building and stands in superb formal gardens. Beside the Hall is a 12th-century chapel, and in the grounds is Wildlife World, a family-oriented wildlife park featuring rare and endangered animals from around the world.

The Domesday Book of 1086 mentioned a hall at Lotherton, and there are records of a village on the site from 1356. We do not know what happened to the village, but over the following four centuries it disappeared and by 1840 it was gone completely, leaving no trace above ground.

In 1540 John Gascoigne of Lasingcroft purchased the Lotherton Estate, but at this point the estate disappears from the historical record until the early 20th century when it was owned by Lamplugh Raper. In 1825 Raper sold it to Richard Gascoigne of Parlington, whose estate bordered Lotherton to the west. 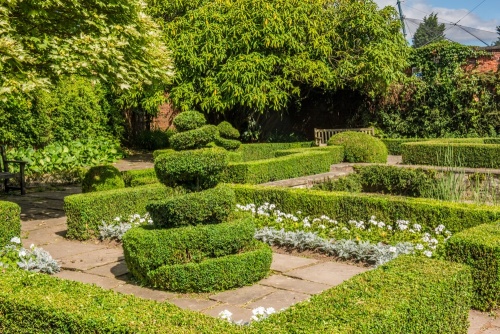 The William and Mary Garden

From Richard Gascoigne the estate passed to his daughter Elizabeth and in 1893 she left it to her nephew Colonel Frederick Gascoigne and his wife Laura Gwendolyn. It was Colonel Gascoigne and his wife who transformed the earlier Georgian mansion on the site to the elegant late-Victorian building we see today and laid out the exceptional formal gardens.

In 1968 Colonel Gascoigne's son Alvary granted the Lotherton Estate to the City of Leeds with money to buy works of art. That art was added to the existing Gascoigne collection, and from that time the City used Lotherton Hall as a museum and as a setting for its outstanding collection of paintings, sculpture, furniture, fashion, metalwork, jewellery, ceramics, silver, and decorative arts. There is an annual exhibition of costume and textiles in the Fashion Galleries (seasonal opening). 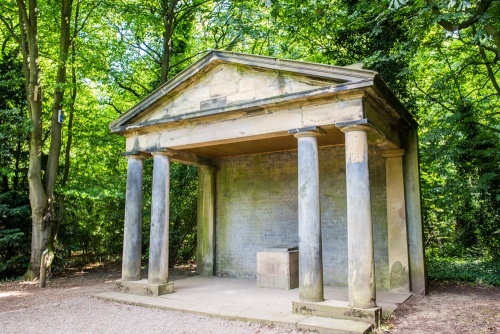 The neoclassical portico in the Parlington Garden

The Gascoignes came over to England with William the Conqueror. The family name suggests that they were native to Gascony in southern France. They were established in the East Riding of Yorkshire by the 13th century. They made their fortune from farming, and later from coal mines near Garforth.

One famous - or infamous - member of the family was Sir Thomas Gascoigne (1596-1686). Sir Thomas was implicated in the Popish Plot to kill King Charles II in 1680. He was tried for treason but managed to escape sentencing by pretending to be deaf.

Another family member made a lasting impression on the world of science; William Gascoigne (1612-1644) was a mathematician and an inventor. His most famous invention was the micrometre, but he also developed the telescopic sextant and the telescopic sight. A later Sir Thomas Gascoigne (1745-1810) was a successful racehorse breeder and established the Parlington racing stud. 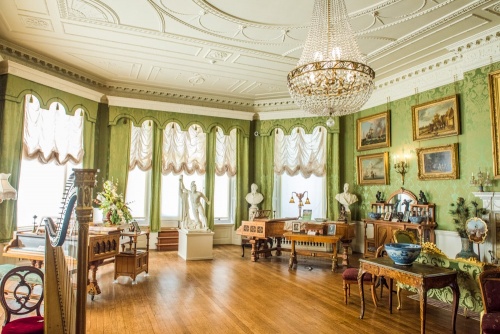 Lotherton Hall began as an 18th-century villa on the site of an earlier Elizabethan hall. The Hall was extended in the 1890s and again in the Edwardian period by Colonel Gascoigne. It now serves a dual purpose; it is a setting for the City of Leeds collection of fine art, and it is preserved to show what life was like during the Gascoigne's residency in the late-Victorian and Edwardian periods. Restored servant's quarters let you experience life 'below stairs'.

Look for a lift installed in the 1930s when Colonel Gascoigne was getting old and unable to climb the stairs. After his death, it was used by his widow Gwendolyn, but one day the mechanism jammed and she was stuck inside for several hours. From that day onward she refused to use it and insisted on being carried up to bed.

Another fascinating feature is a safe, made around 1903 to store the family silver. The safe stood beside the butler's pantry, but it was also directly above the boiler house, and rising smoke from the boiler tarnished the silver. Colonel Gascoigne was so security-conscious - one might say paranoid - that he stored the family silver in a vault in Leeds every time the family were away from Lotherton Hall. One of the silver items on display is a racing cup made in 1797 by Robert Sharp of London. It was purchased to commemorate four winners of the St Leger Stakes who were trained at Parlington Hall. 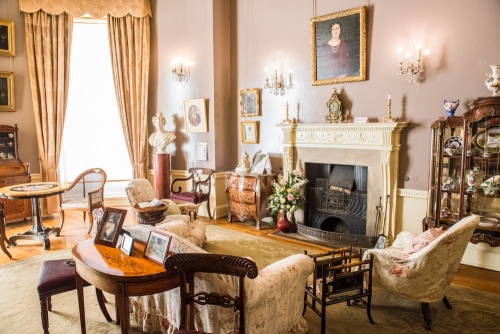 The most famous work of art on display at Lotherton Hall is 'The Irish House of Commons', painted by Francis Wheatley in 1780 to commemorate an address by Henry Grattan who spoke passionately for a motion that 'the people of Ireland are of right an independent nation and ought only to be bound by the King, Lords and Commons of Ireland'.

In the former stables are several historic vehicles including a state coach built in 1853 and once owned by the Earl of Derby. It was made by Hoopers of London who were considered the premier coachmakers in England at the time. It was kept by the Earl at Knowsley Hall in Lancashire. It has been used by the Lord Mayor of Leeds on several ceremonial occasions.

Another historic vehicle is a late 19th-century brougham; a closed carriage drawn by a single horse. It was made by Barker & Co. of London and has also been used by the Lord Mayor of Leeds on special occasions. 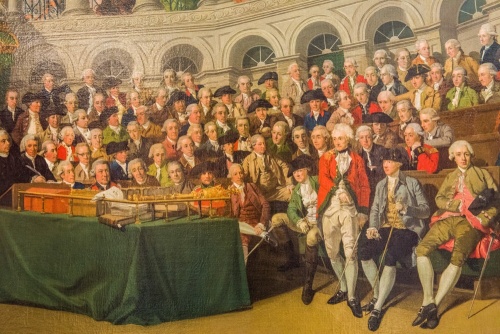 The gardens are laid out to the south and west of the Hall. At the south-west corner of the Hall is The Terrace, a formal area designed by William Goldring in 1902. From the east side of The Terrace, stone steps lead down into a sunken garden area designed by Mrs Laura Gascoigne with help from her friend Ellen Wilmott. The centrepiece here is a fountain bordered by yew hedges. Herbaceous borders are sheltered by hedges that extend to a summerhouse incorporating an old entrance to the Hall.

In the south-east corner of the garden is a shrubbery and a rock garden known as The Dell. A series of sinuous paths lead through The Dell, with remains of an old water feature. North-east of the Hall is the William and Mary Garden, a paved rectangular area around a sunken pond surrounded by box hedges.

A lime avenue leads to a stone temple that was once the entrance portico of Parlington Hall, the Gascoigne's former residence. South of the Hall is a ha-ha, a hidden ditch separating the Hall from a wildflower meadow laid out by Mrs Gascoigne. There is also a kitchen garden laid out sometime after 1906.

Another highlight of Lotherton is a herd of resident deer. Keep your eyes open, as they can often be seen wandering through the parkland that surrounds the house. 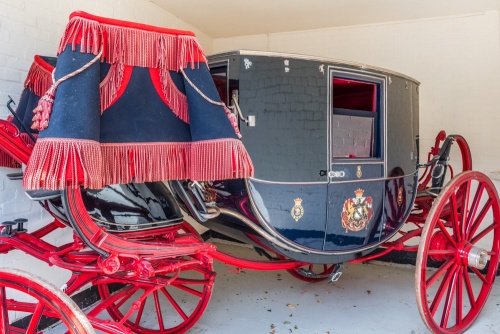 Next to the Hall is a 12th-century chapel, built by the lord of the manor so that residents of the medieval village did not have to walk to Sherburn in Elmet for services. The chapel was restored by Colonel Gascoigne in 1917 and boasts Gascoigne family memorials, a 17th-century pulpit and sounding board, and a richly-carved altar table brought by Colonel Gascoigne from a Lutheran church in Lower Saxony. Look for a pillar stoup for holy water, dating to the 12th century, and an early 20th-century rood designed by Sir Ninian Comper.

There is more to Lotherton than the historic house, gardens, and chapel. It is a popular destination for families, drawn by Wildlife world, home to a wide variety of animals and birds from around the world. Wildlife World is divided into different zones and visitors are encouraged no just watch the animals but learn how endangered species can be protected. Highlight animals include tapirs and Humboldt penguins, while the aviary includes popular species such as the Andean condor, hornbills, and snowy owls.

Lotherton Hall is on Lotherton Lane, off the B1217 near junction 43 of the A1(M). There is a free parking area for visitors to the Hall and chapel. 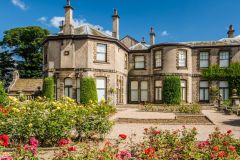 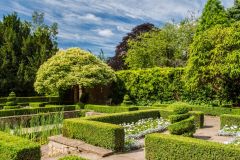 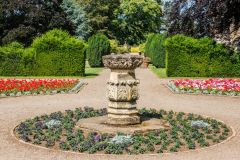 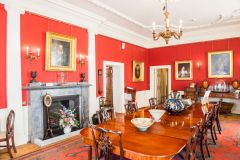 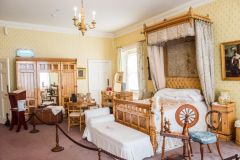 More self catering near Lotherton Hall