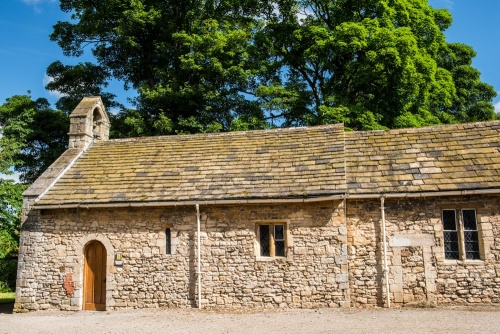 Lotherton Hall is an Edwardian stately home in a rural setting west of Leeds. Beside the mansion stands a picturesque 12th-century chapel, dedicated to St James. Lotherton Chapel is an excellent example of a medieval 'chapel of ease', built by the lord of the manor so that residents did not have to travel three miles to the parish church in Sherburn in Elmet.

Unlike many chapels of ease, it never became a parish church in its own right. And because it was never a parish church, historical references for the chapel are scanty. The first written record comes from 1650, some 500 years after the chapel was built.

St James' Chapel may be the smallest church in West Yorkshire. 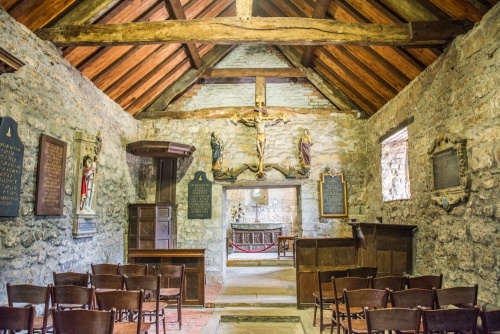 No trace of the medieval manor here has ever been found. There is evidence of a medieval settlement named Luttrington (aka Lotherton) to the north of the chapel, but no buildings remain above ground. Construction is very simple; the chapel is a low single-storey building with a bellcote over the west gable. It is made of magnesian limestone under a slate roof.

The chapel was probably built in the second half of the 12th century. Two Norman windows remain from that period. The large east window above the altar was subsequently enlarged, while other windows may date to after the Reformation. One of the best features surviving from the Norman church is the north doorway. The south doorway, which now acts as the main entrance, was inserted in the Georgian period when the nave was shortened.

The chapel was restored by Colonel and Mrs Gascoigne of Lotherton Hall in 1917. The restoration was under the direction of a prominent architectural historian named John Bilson, but much of the work was carried out by the Lotherton Estate mason, George Garbutt. 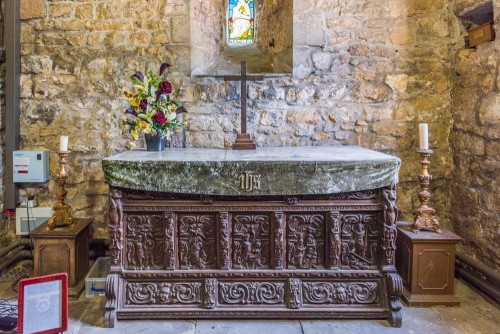 Only a few of the medieval furnishings remain, including an octagonal 17th-century pulpit and sounding board with an adjoining clerk's desk. There is also a stone pillar stoup with a finely crafted scalloped capital.

Over the chancel opening is a painted rood designed by Sir Ninian Comper in memory of the soldiers who were treated at Lotherton Hospital during WWI. Lotherton Hall was used as a military hospital during the war. The chapel was restored and served the patients and staff who lived and worked here. 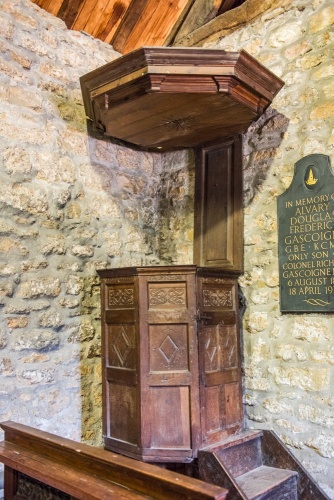 The 17th-century pulpit and sounding board

On the wall is a tablet commemorating a flying officer stationed at Headley Bar aerodrome during WWI. His plane crashed in the park and he was killed. Two flags hang in the chapel; they flew over Lotherton Hall when it was used as a VAD hospital during the war. To the right of the chancel arch is a reminder of another war; a memorial to Douglas Wilder Gascoigne, who died in Normandy in 1944.

Lotherton Hall is now owned by the Leeds City Council and operated by its museum service. Interestingly, St James' Chapel is not redundant; it is still a consecrated building and still hosts services.

The Lotherton Estate is on Lotherton Lane, off the B1217 near junction 43 of the A1(M). There is a free parking area for visitors to the Hall and chapel. 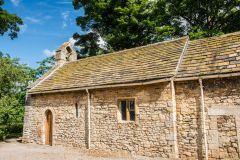 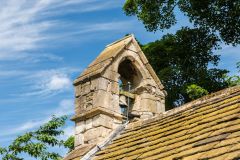 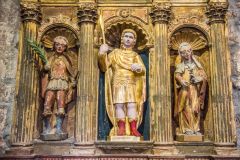 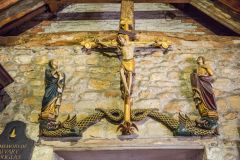 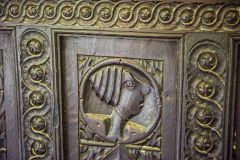 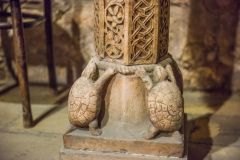 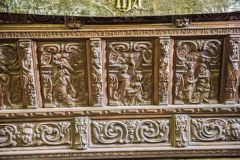 More self catering near Lotherton Chapel