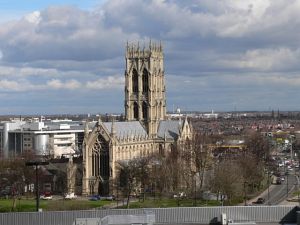 Doncaster skyline, showing the Minster church
A large Yorkshire town with a long history, Doncaster dates back to AD 71 when the Romans built a fort here. The town was granted a market charter by Richard I in 1194. Doncaster is famous in sporting circles as the location of the St Leger Stakes, one of the racing world's classic races.

Doncaster grew up around the site of a Roman fort established to guard a crossing of the River Don. The fort has been identified as 'Danum', mentioned in the 2nd century Antonine Itinerary of Roman military sites. The Roman route across the Don was an alternative to the major Roman road of Ermine Street, linking Lincoln and York.

The site of the original Roman fort is a subject of debate, though it may have been sited where the minster church of St George now stands, next to the river.

Doncaster developed as a fortified town, or 'burh', in the Saxon period, and is probably the 'Cair Daun' mentioned in the writings of the 9th-century historian Nennius. After the Norman Conquest, the town was granted to Nigel Fossard, who strengthened the Saxon fortifications and built nearby Conisburgh Castle to control his new domains. At the time of the Domesday Book Doncaster was recorded as having 2 mills and a church.

Richard I granted Doncaster a town charter in 1194, and this was followed by a market charter in 1248. The market is still in operation. Doncaster supported the Royalist cause in the Civil War, and Charles I rewarded the town by naming it a Free Borough.

The most notable building in Doncaster is the 18th-century Mansion House, which houses a museum of local history and a notable art gallery. Another historic building is Cusworth Hall, just outside the town. Cusworth is an 18th-century country house now housing a museum of South Yorkshire heritage.

The Minster Church of St George

The imposing Victorian church of St George is more commonly known as Doncaster Minster. There was a 12th century Norman church on this site beside the River Don, but that church burned down in 1853. Sir George Gilbert Scott was responsible for rebuilding the minster church, and the result has been called 'Victorian Gothic at its very best'.

Perhaps the most interesting feature is a clock designed by the Dent company, who also made the clock adorning the Palace of Westminster Clock Tower in London. The tower rises an impressive 170 feet, and the result is more cathedral than parish church.

Explore the heritage of Doncaster at the Museum and Art Gallery, where you can learn about the town's archaeology, natural history, and heritage as a centre for the decorative arts. The museum has a special exhibit based on the Doncaster Racecourse and is home to displays of the King's Own Yorkshire Light Infantry.

More self catering near Doncaster >>

More bed and breakfasts near Doncaster >>