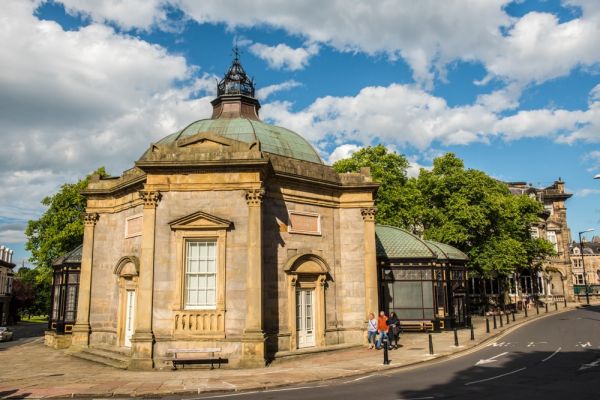 The pretty Yorkshire town of Harrogate made its name as a fashionable Victorian spa. The buildings of central Harrogate reflect this heritage, with beautiful examples of fine 19th-century architecture. The Royal Pump Room stands over the main mineral spring.

The mineral-rich natural springs were discovered in the 16th century. By the following century, people began coming to Harrogate to 'take the waters' and drink the iron-bearing 'chalybeate' water.

By the Georgian period, Harrogate was known as 'The English Spa', and it was the stream of ill, and wealthy, people coming in search of health that made Harrogate such a prosperous place and contributed to the wealth of impressive civic architecture that makes it such a pleasure to visit.

Isaac Shutt built the Pump Room in 1842 to provide shelter for visitors to the Old Sulphur Well. An annexe was added in 1913 to protect the surging number of visitors. The annexe now serves as a museum covering the history of the spa. You can look down into an underground chamber containing the original wellhead.

Over 15,000 people used to flock to the Pump Rooms each year, drawn by the health-giving benefits of the strongest sulphur wells in Europe. Perhaps the most famous visitor to the spa was Tsarina Alexandra of Russia, who came in 1911.

Harrogate's spa drew the famous and infamous from across Europe, a mix of society that prompted Charles Dickens to write that Harrogate was 'the queerest place with the strangest people leading the oddest lives!'

The elegant building that houses the Pump Room is not the original structure. That was moved in 1842 to cover Tewit Well, the very first chalybeate water source discovered in Harrogate. Tewit Well stands on Cherry Tree Walk, on the edge of The Stray park. 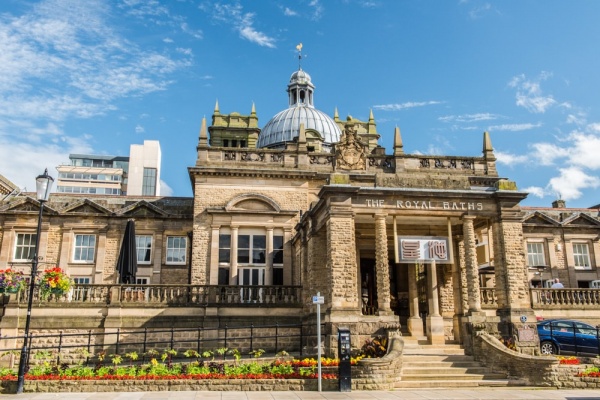 Other elegant buildings remaining from Harrogate's heyday as a fashionable spa include the Royal Baths, built in 1894. A competition to design the imposing domed structure was won by the London architects Baggalley and Bristowe and the Baths were officially opened by HRH The Duke of Cambridge in 1897. Beneath the Royal Baths are the Kissingen and Sulphur Springs, lauded as among the finest mineral springs in England.

A short distance away stands the Royal Hall, an exhibition centre and theatre. The Royal Hall opened in 1903 as The Kursaal. The curious name came from a German word that means 'cure hall'. Despite the name, it was not intended to have a spa function but to be a space for large receptions. It served as a theatre and cinema before being transformed into an elegant space for exhibitions and large events.

One of the first purpose-built spa buildings was the Harrogate Promenade Rooms on Swan Street. The Promenade Rooms offered a refined place for spa visitors to socialise. The Rooms were later converted into a reading room, and later still became a fashionable theatre, hosting such famous performers as Sarah Bernhardt, Oscar Wilde, and Prince Edward's mistress, the actress Lily Langtree.

After a short period as the town hall, the building was transformed to become the Mercer Art Gallery, named for Yorkshire artist Sidney Mercer. The Mercer exhibits the town art collection and features changing exhibits of work by local artists. As of this writing, The Mercer is free to enter. 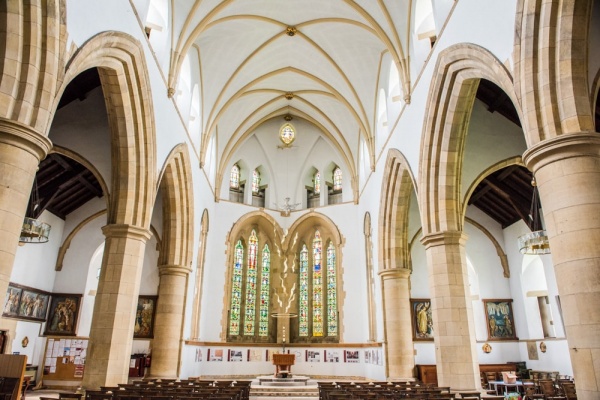 With all the elegant Victorian buildings in Harrogate, it comes as some surprise that the only Grade-I listed building in town has no connection to the spa. A short stroll from central Harrogate is St Wilfrid's Church, a stunning early 20th-century building designed by architect Temple Moore and completed by his son-in-law after Moore died.

In a curious way, St Wilfrid's owes its magnificence to a family tragedy. In 1902 two sisters travelling from London to Scotland decided to break their train journey at Harrogate. One of the sisters died suddenly while at prayer that evening and the other decided to settle permanently in Harrogate. There she devoted herself to raising money for a new church in honour of her dead sister. The result is perhaps the finest example of early 20th-century architecture in northern England.

Also in the centre of Harrogate is St Peter's Church, begun in 1870 and featuring outstanding Victorian stained glass windows by Burlison and Grylls. It is rare to see a church with stained glass all by the same designers and makes a visit to St Peter's like a step back into the age of Victorian Gothic. 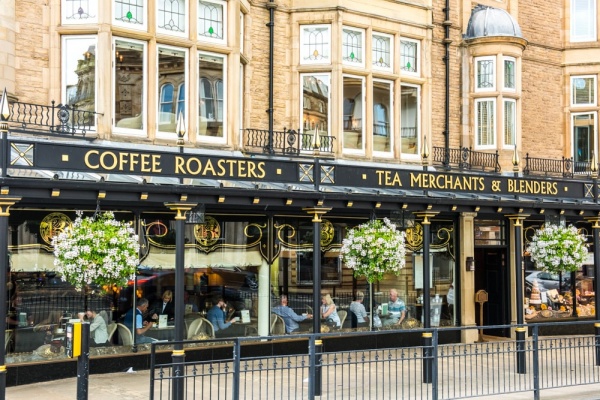 A Harrogate icon, the tearooms were opened in 1919, and modern visitors still queue for afternoon tea. The tearoom was launched by Frederick Belmont, who served Swiss confectionery in an elegant setting to spa visitors. Bettys offers a mouth-watering selection of over 300 cakes, chocolates, and breads, and over 50 different types of tea and coffee.

Among the numerous Victorian and Edwardian buildings is the Royal Hall Theatre, an Edwardian concert Hall, where you can enjoy everything from classical music to comedy and the latest pop stars. 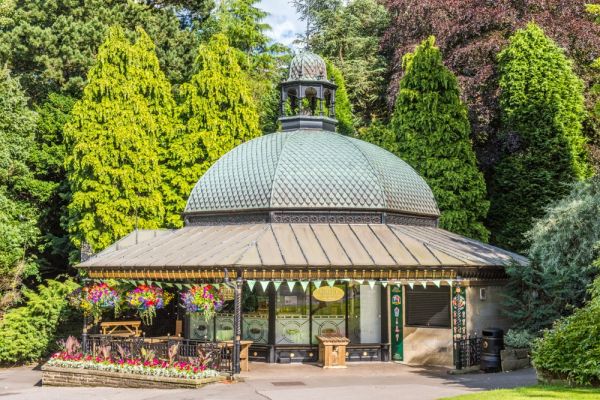 Valley Gardens in Low Harrogate covers 17 acres of woodlands dotted with mineral springs. Low Valley is thought to have more mineral springs than any place on earth! Over 35 springs were discovered in Bog Field alone, and that's just one part of the Garden. The garden has been listed Grade II for its historic interest by English Heritage.

Another popular garden is The Stray, an area of open parkland in the centre of town. The Stray was laid out in 1778 as a way to link major mineral springs by a protected green belt. The park size was fixed by law at 200 acres, and if any part of the park is removed it must be replaced by adding more land elsewhere.

In The Stray is Tewit Well, the first chalybeate well in Harrogate, discovered in 1571. It is protected by a neoclassical domed pavilion designed around 1807 to cover the Old Sulphur Well. The pavilion was moved to Tewit Well in 1842 when the Royal Pump Room was built.

A much smaller garden area is Crescent Gardens, at the heart of the most popular visitor attractions such as the Pump Room, Royal Baths, and Town Hall.

On the outskirts of Harrogate stands RHS Harlow Carr garden, a historic 68-acre garden developed around a 19th-century spa. The spa grounds were laid out as a peaceful garden for people taking the waters. Today a footpath links Harlow Carr with Valley Garden in the heart of Harrogate.

Just outside Harrogate are the stately homes of Ripley Castle, Harewood House, and Newby Hall.

Harrogate consistently makes the list of best places to live in England. 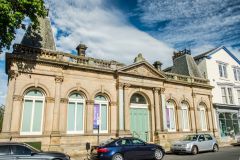 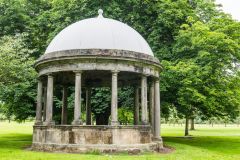 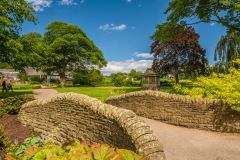 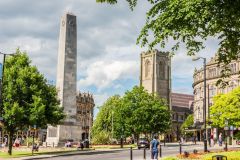 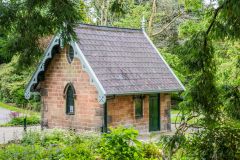 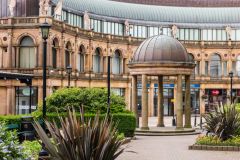 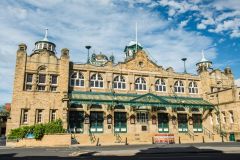 More self catering near Harrogate >>

More bed and breakfasts near Harrogate >>