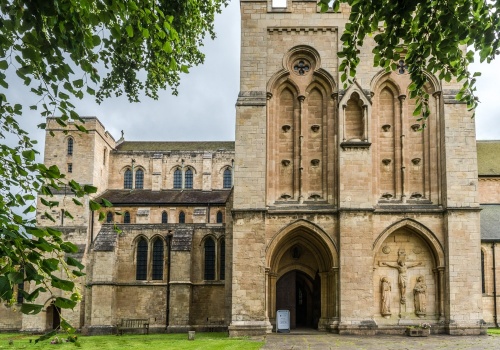 St Wilfrid's Church is an exceptional example of early 20th-century architecture and the only Grade I listed building in Harrogate. The church was designed by architect Temple Moore and begun in 1904. It is one of the largest parish churches in England and is considered Moore's finest work, though he died before the building could be finished.

The Duchy Estate is an affluent area of Harrogate known for its large number of detached houses. During the heyday of Harrogate Spa, when the town was a destination for wealthy visitors, the Duchy Estate saw large numbers of impressive houses built. But the growing area had no parish church, and Harrogate as a whole had no churches that emphasised the Anglo-Catholic, or 'High Church' form of worship. 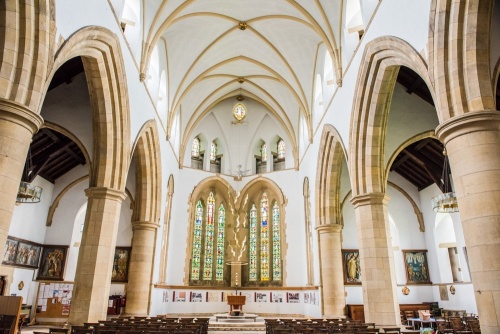 Looking towards the font

In 1902 sisters Elizabeth and Jane Trotter were travelling from London to Scotland when decided to break their train journey at Harrogate. Jean Trotter died unexpectedly while at prayer that evening and Elizabeth 'Bessie' Trotter decided to settle permanently in the town. She lived in the Duchy Estate and devoted herself to raising money for a new church in honour of her dead sister.

The first congregation gathered on 24 August 1902 in a corrugated iron building in one corner of the building site. The foundation stone for the new church was laid in 1904 and the church was consecrated in 1914. 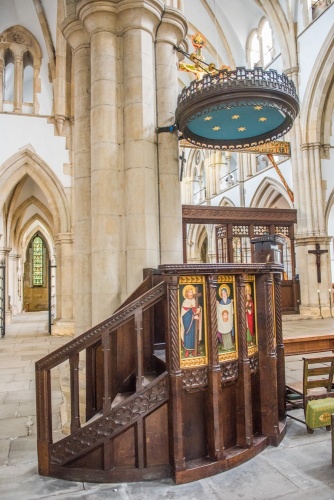 The pulpit, by Temple Moore

Set into the nave floor is a memorial brass commemorating Harold Hornsby of Keble College, Oxford, who acted as a server in St Wilfrid's Church. Hornsby tragically died by drowning in Oxford on 19 June 1911.

On the wall is a war memorial in the form of a richly painted triptych with a central panel depicting St George slaying a dragon. 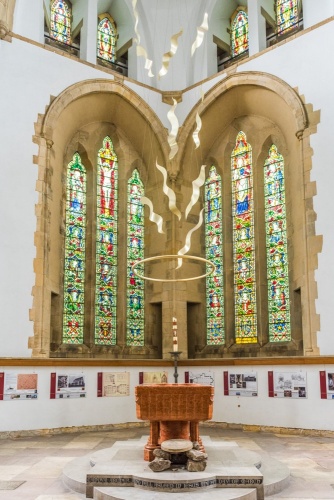 The pulpit and 'dove from above' sculpture

Temple Lushington Moore (1856-1920) was born in Ireland, educated in Glasgow, and tutored in Yorkshire before moving to London to article as an architect under Sir George Gilbert Scott in 1875. Moore left to open his own practice three years later but he continued to work closely with Scott, even finishing several commissions when Scott's health began to fail.

He also served as a teacher to Scott's son, Giles Gilbert Scott. His own son Richard died in WWI. Moore's son-in-law Leslie Moore joined his architectural practice in 1919 and it was Leslie Moore who completed St Wilfrid's Church after Temple Moore died in 1920.

Temple Moore built and restored country houses, schools, memorials, and halls but he is best remembered for his work restoring old churches and building new ones. He was by conviction an Anglo-Catholic (High Church), and his designs reflect Anglo-Catholic values, with rich colours and beautifully crafted furnishings as an aid to worship. St Wilfrid's Church is a perfect example of these themes. 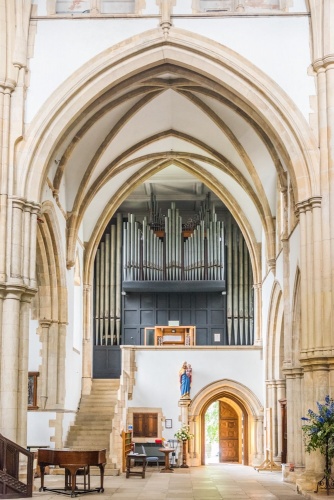 Thirty-four of Moore's churches have been listed for the heritage value. Two, including St Wilfrid's, are listed Grade I (the highest designation) while another 16 are listed Grade II*. Perhaps his finest secular design was for the restoration of Treasurer's House in York.

The architectural historian Nikolaus Pevsner called St Wilfrid's 'The biggest and by far the best of Harrogate's churches, the masterwork of Temple Moore'.

St Wilfrid's Church is within an easy walk of the town centre. It stands on Duchy Road, off Ripon Road (the A61). There is no dedicated parking but you can usually find parking along the street. The church is normally daily to visitors and was open when we visited. 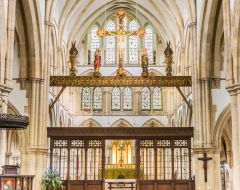 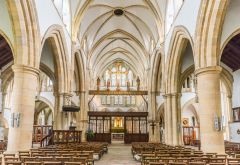 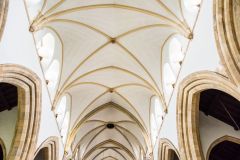 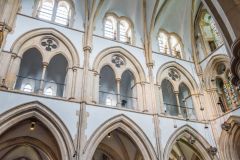 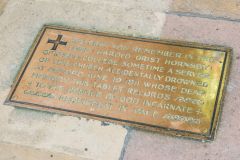 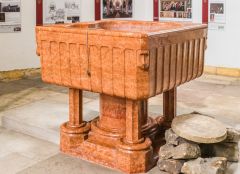