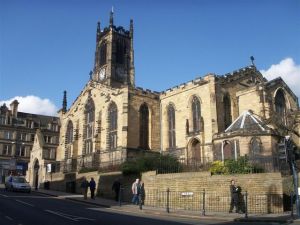 A large industrial town to the south of Bradford in western Yorkshire, Huddersfield has a history dating back to the Iron Age. The town grew enormously during the Industrial Revolution as a centre of the textile industry. Castle Hill rises above the town, with Victoria Tower providing wonderful views from the top.

The Tolson Museum provides exhibits exploring the rich industrial and social heritage of the area. The museum bills itself as 'Huddersfield's History Book', and tells the story of the town and its people, from prehistory to the textile boom. The museum is housed in historic Ravensknowle Hall, built by John Beaumont in 1859 at a cost of £20,000.

The house and grounds were given to the Huddersfield Corporation in memory of 2 members of the Tolson family who died in WWI. The Victorian mansion was transformed into one of the finest local museums in England, with displays ranging from a 1914 Valveless motor car to The Netherton Hoard, a collection of 17th-century coins buried for safekeeping during the Civil War and only rediscovered in 1897.

Another place worth visiting is the Huddersfield Art Gallery, home to a large collection of sculptures, paintings, and drawings by such famous artists as Henry Moore and Francis Bacon, as well as a sizeable collection of works by local artists.

St George's Square boasts fine Victorian buildings, and the extravagant railway station is as grand as many stately homes. The building that launched 'the Huddersfield Look' was the George Hotel, which opened in 1850.

The hotel was designed by William Wallen with an Italianate facade, and Wallen's style was adopted by civic buildings and other large architectural projects over the second half of the 19th century so that today much of Huddersfield's town centre has a very cohesive sense of style.

Huddersfield's parish church dates to 1838 and was designed by James Pritchard, who also designed the railway station. The grand Victorian building is just the latest church to stand on the same spot and incorporates stones from an earlier Georgian building. The earliest St Peter's church, however, was founded by Walter de Lacy in the last decade of the 11th century.

Tradition says that De Lacy built the church after he was thrown from his horse and landed in a swamp. He feared for his life and vowed that if he escaped the mire he would build a church at Huddersfield. He did survive his ordeal and erected a church as he had promised.

The first recorded vicar was Michael de Wakefield, who took office in 1216. One interior highlight is the Lady Chapel screen, built by Robert Thompson, the 'Mouseman' of Kilburn and bearing his signature carved mice figures. The font dates to 1570, but the real eye-catching feature is the east window and baldachino, both designed by Sir Ninian Comper as a memorial to the dead of WWI.

If a railway station could be a stately home, Huddersfield's iconic Victorian station would be Castle Howard, or perhaps Wentworth Woodhouse. The station was designed by James Pigott Pritchard in 1846, in grand neo-classical style, with an opulent facade featuring a portico and columns in the Corinthian order. It has been called 'a stately home with trains in it' and is easily one of the best railway stations in England. The station looks across St George's Square towards Lion Buildings.

Another architectural highlight is the Town Hall, begun in 1875 by John Abbey. In 1881 the complex was enlarged with the addition of a Magistrates Court and Concert Hall seating up to 1200 people.

Despite all the listed Victorian buildings in the town centre, the most striking historic building in Huddersfield is Victoria Tower on Castle Hill, looking out over the town. The tower was built in 1899 to commemorate Queen Victoria's Diamond Jubilee and originally stood 106 feet high.

The height was quite intentional, as the height of the tower plus the height of Castle Hill added up to exactly 1000 feet above sea level. That special arithmetic was undone in 1990 when the tower was restored, and the top 7 feet removed. It is open to the public on special open days throughout the year.

The Victoria Tower is just the latest in a long line of historic structures atop Castle Hill. Around 2000 BC a late Bronze Age hill fort was established here, and this was later extended in the Iron Age with concentric rings of earthwork defences.

In the 12th century, a Norman motte and bailey castle topped the hill, then later in the medieval period the entire hilltop was settled. The medieval village was eventually deserted, but Castle Hill was later used for large public gatherings, including Chartist rallies in the 1840s and a union rally in 1883. It was also the site of public entertainments, including cockfighting, bowling, and bare-knuckle prize fights. 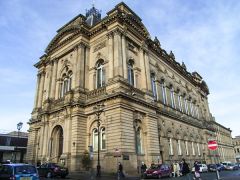 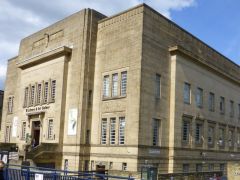 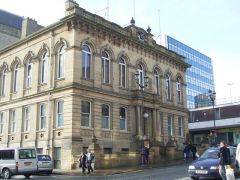 More self catering near Huddersfield >>

More bed and breakfasts near Huddersfield >>