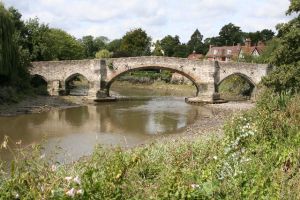 The 14th century bridge at Aylesford

Aylesford is a large village on the River Medway, accessed via a medieval five-arched bridge. There has been human settlement here since Neolithic times, as evidenced by the long barrows of Kits Coty to the north of the village.

Today Aylesford retains its historic core, but the settlement has spread along the river in both directions, with railroad works and a busy shopping outlet bringing a modern bustle further from the historic centre.

Aylesford seems to have attracted famous battles throughout British history; Hengest the Jute fought the British leader Vortigern here in 455 AD, King Alfred defeated the Danes in 893 AD, and Edmund Ironside did likewise in 1016, pursuing the fleeing invaders all the way from Otford and killing many by the time they reached Aylesford. And the royals kept coming; William the Conqueror took Aylesford manor for himself after the Norman Conquest.

The origins of the village are a matter of some mystery. Legend has it that a local; chieftain named Aegel controlled a river crossing, and thus the village was known as Aegel's ford, which in time became shortened to Aylesford. The river provided a boost to commerce during the Middle Ages and into the 18th century with barges carrying goods up and down the waterway.

The parish church of St Peter and St Paul dates to the Norman period, and probably existed long before then. It may have served travellers crossing the ford, who could pause and pray for a safe crossing or give thanks for successfully completing the passage. The double-nave and chancel are out of alignment, possibly because they were built at different periods.

The oldest part of the building is the base of the tower. Within the church are the 17th-century Colepepper tomb, a memorial brass set in the chapel floor, and several funerary helmets and swords hanging in the chapel and chancel.

The most iconic structure in Aylesford is not the church, however, but the 14th-century bridge that still carries traffic over the River Medway into the village.

Of the historic buildings remaining in Aylesford among the most striking is the mid-Victorian mansion of Preston Hall. Architectural historian Nikolaus Pevsner was not impressed with Preston Hall, calling it 'hard to love'.

The Hall was built in 1849 for Edward Betts by architect John Thomas. The result is either a lovely example of Victorian Gothic or a ponderous attempt at gentility by an architect who wasn't up to the task, depending on your taste. The Hall has long since passed from private ownership and now serves as a nursing home.

Near the village is Aylesford Priory, a restored medieval monastic house of Carmelite friars that dates to 1242. After the Reformation, the friary was sold into private hands, and the monastic buildings were converted into a luxurious mansion. In 1949 the Carmelite order bought the site and re-founded it, restoring many original medieval features. The historic highlight is the Pilgrim's Hall, built around 1280. 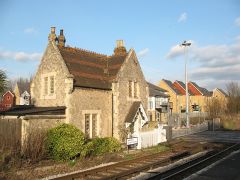 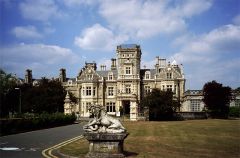 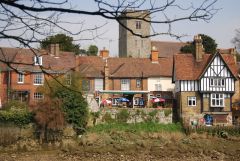 More self catering near Aylesford >>

More bed and breakfasts near Aylesford >>