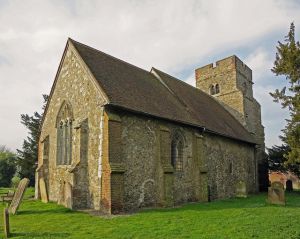 Burham, St Mary's Church
St Mary's is a historic church beside the River Medway, on the ancient pilgrim's route to Canterbury. The church is built of local ragstone and flint and consists of a nave, chancel, a west tower. An octagonal stair turret climbs the south-west angle of the tower. There used to be north and south aisles, but these were pulled down at some point in the past.

St Mary's stands opposite Snodland church on the far bank of the Medway. The towers of the two churches are very similar, suggesting that they were both used as shelters by pilgrims crossing the river here.

In the 19th century, the entire village of Burham moved to higher ground, and built a new church, leaving St Mary's in isolated splendour. Ironically, the newer church has itself been pulled down.

St Mary's has features from every time period, leading it to be dubbed 'an Alphabet of English Church Architecture'. The oldest part of this particular alphabet is a collection of Roman tiles taken from local Romano-British villas.

Aside from the Roman tiles, the oldest part of the building is Norman. The main structure of the building is 12th century, with 13th-century nave arcades, and there are two Norman fonts, one decorated with traditional Romanesque carving.

The west tower rises in four stages to a crenellated top and dates to the 14th century. It may have been paid for by offerings from pilgrims.

The church was unfortunately in the news for all the wrong reasons in 2013 after thieves broke in and stole a tall brass crucifix and a pair of candles.

You can keep up to date with special events and learn more about the church from the Friends of St Mary's Burham.