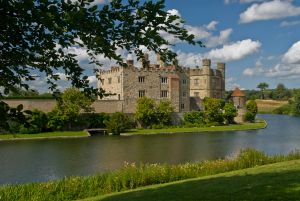 Leeds
Not to be confused with the large city of the same name in Yorkshire, Leeds, Kent is a village near Maidstone. Leeds is famous for lovely Leeds Castle, a moated medieval fortress dating to the 12th century.

The parish church of St Nicholas may date to the Saxon period, and it contains a medieval rood screen and a 15th-century timber roof, and boasts the second tallest Norman tower in England.

There was once a priory in Leeds, founded around 1119, but that was destroyed in Henry VIII's Dissolution of the Monasteries. The site of the priory can be seen behind the George Inn, and the ruins are reputed to be haunted.

The inn itself dates to 1652 and was built as a coaching inn. The hay for coach horses was stored over the current back bar.

There used to be another pub in Leeds; the Ten Bells, named for the number of bells hung in St Nicholas church. However, the pub building became unsafe and it had to be pulled down in 2012.

The history of the village goes back to at least the Saxon period when the castle was founded around 978 AD. At the time of the Domesday Book, there were 28 villagers living here, with 8 smallholders and 18 slaves. It is interesting that there were also 5 mills to serve the relatively small village.

The name 'Leeds' may come from the stream which runs through it, called in Old English 'hlyde', meaning 'the noisy one'. An alternative explanation is that the name comes from the Old English 'Esledes', meaning hillside, or slope. Or perhaps it comes from Ledian, who built the timber fort that evolved to become Leeds Castle.

In the Domesday Book of 1086 it was called Esleades, but that was transformed to Hlydea in 1100 and its current iteration of Leeds in 1610.

Aside from the church of St Nicholas, another notable listed building in Lees is Battel Hall, dating to the 14th century, with 17th-century restoration.

More self catering near Leeds >>

More bed and breakfasts near Leeds >>