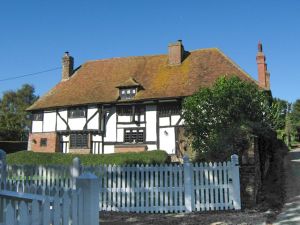 A village near Folkestone, Lyminge boasts a lovely Saxon church dating to at least 975 AD. But the history of Lyminge goes back much further, at least to the Roman period, when a villa was built close to the site of the current parish church. Queen Ethelburga of Northumbria founded an abbey here in about AD 633.

One of the earliest Christian sites in Kent, the church began as an abbey founded by Ethelburga and Bishop Paulinus around AD 633. Ethelburga was the widow of Edwin, king of Northumbria, and daughter of King Ethelbert.

When Edwin died in battle in AD 633 Ethelburga fled to Kent where her brother, King Eadbald, gave her land at Lyminge. Here she occupied a range of old buildings, possibly of Roman origin. When Ethelburga died in AD 647 she was declared a saint, and her remains were housed in a shrine, where they quickly became a destination for pilgrims.

The abbey housed both men and women and lasted until some time around AD 840 when Lyminge was attacked by the Danes. The abbey was refounded for men only in the late 9th century, but the monks moved to Canterbury in AD 965 and the monastic church became the parish church for the residents of Lyminge.

Remains of the 7th-century church can be seen east of the porch. The nave and chancel are later Saxon work, though the string courses in the chancel may be Roman. You can easily make out reused Roman stones in the window surrounds.

The most intriguing historical feature is a recess in the south wall. This is thought to have been the site of Ethelburga's shrine until the saint's relics were seized by Archbishop Lanfranc in 1085 and transferred to Canterbury.

Look for a fragment of medieval glass depicting a bishop's head in the south chancel window, and the arms of Cardinal Bourchier (d. 1486) over the south door. The large east window dates to 1511, though the stained glass is Victorian.

In a field off Well Road an ancient spring rises from the earth. The site may be contemporary with the St Ethelburga's abbey, or perhaps even older, though the wellhead that covers it is a modern one made of brick and timber.

In 2012 the remains of a Saxon feasting hall were uncovered on the village green. The hall was 21m by 8.5m, and probably held up to 60 people. Amidst the foundation walls, archaeologists found jewellery, bone implements, even a manicure set of bronze.

The hall would have been used for feasts and drinking lasting days at a time. It seems to have been abandoned as inhabitants turned to Christianity. Another notable archaeological discovery was a Jutish burial ground dating to the 6th century. 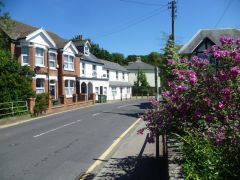 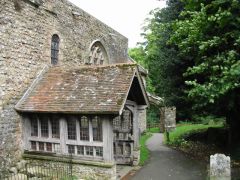 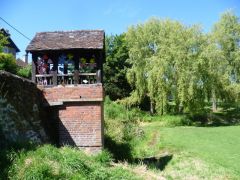 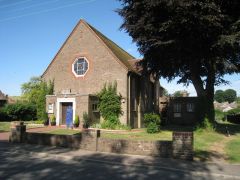 More self catering near Lyminge >>

More bed and breakfasts near Lyminge >>