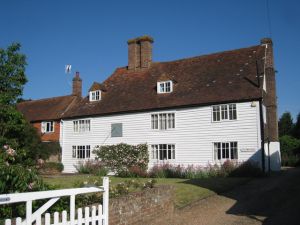 The pretty village of Sandhurst stands just inside the Kent border and is notable for its large number of timber-framed buildings. It boasts a restored windmill, 14th-century church, and striking Victorian clock tower. Just outside Sandhurst is 14th-century Bodiam Castle, a romantic moated ruin now preserved by the National Trust.

Sandhurst's parish church of St Nicholas stands well away from the village itself., at Sandhurst Cross. This may be due to the devastating effects of the Black Death, but it is also possible that the village grew up around the major trading route between Hawkhurst and the port of Rye. The church nave and tower date to the 14th century, while the chancel is primarily 15th century.

The east window in the south aisle has medieval stained glass, dating to around 1450, depicting St Michael weighing souls. Under the tower is an old bell, cast in 1450. There is a 14th-century aumbry in the chancel and an 18th-century wall monument to members of the Hodson family.

The most interesting person connected to St Nicholas church is Titus Oates, who began his clerical career as a curate here. Oates is known for inventing 'The Popish Plot', an imaginary plan by the Jesuits to assassinate Charles II in 1678. One of those accused by Oates was the diarist, Samuel Pepys.

The picturesque Ringle Crouch Green Mill is a restored 19th-century smock windmill. The 2-storey brick base is original, built in 1844, but the upper section is a replica, built in the 1990s. Curiously, the replica has the sails the wrong way around from the original. It is now a private dwelling, but the sails still turn and now generate electricity rather than grind corn.

A local landmark is the 'Oakes Memorial', a clock tower erected on the Upper Green in 1889 to commemorate Captain Arthur Oakes, a Justice of the Peace. The west face of the clock is directly in line with the front entrance of Downgate, where Oakes lived. The mechanism needs to be wound once a week. It does not keep exact time, for the movement is supported on timber, which changes shape slightly in changeable weather.

There are a pair of tea rooms in the village and the New Swan pub.

Note
Don't confuse the Kent village of Sandhurst with the famous military academy of the same name in Berkshire. 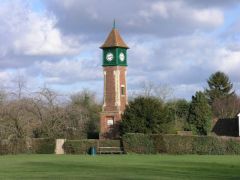 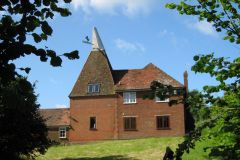 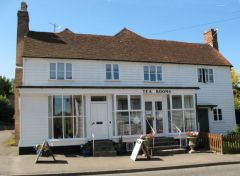 More self catering near Sandhurst >>

More bed and breakfasts near Sandhurst >>