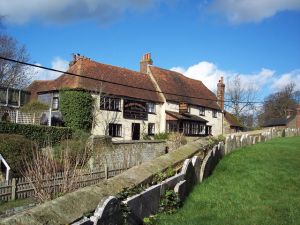 Horse Guards Inn, Tillington
A small village with ancient origins, Tillington dates back to the Saxon period. There are a very large number of historic buildings in the village; fully half the cottages are Grade II listed.

There are a number of half-timbered medieval houses, plus the Georgian mansion of Pitt House. Despite all these historic buildings, however, the village is best known for its unusual church tower.

The church of All Hallows may date to the 11th century, but it was heavily remodelled in 1810 when the tower was created. The design is akin to a crown, similar to those found on some Scottish buildings, and is known as Scots Crown Spire.

The tower drew artists such as JMW Turner and John Constable to draw its striking profile. The tower peers over the stone wall surrounding Petworth House, a beautiful Elizabethan mansion.

More self catering near Tillington >>

More bed and breakfasts near Tillington >>