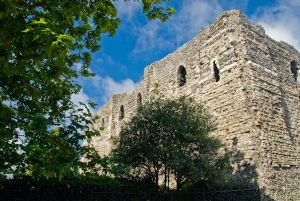 When William the Conqueror overcame King Harold and his Saxons at the Battle of Hastings, one of his first acts was to establish three powerful castles in the southeast of his new realm, at Canterbury, Dover, and Rochester. His new castle at Canterbury is what is now called Dane John, a corruption of the French word for donjon, or keep.

The castle saw the first in a long line of historical dramas in 1087 when monks of St Augustine's Abbey refused to accept a new Norman abbot. Lanfranc, the Archbishop of Canterbury, had the ringleaders of the monks imprisoned in the castle and the others expelled.

The new keep was begun in the reign of William II and completed about 1120 by Henry I. This stolid stone structure stood 80 feet high and measured about 98 by 85 feet. The walls were massively thick, about 13 feet in places, and the building could only be entered by a stone stair to a first-floor door on the northwest side. The first floor had a great hall and kitchen. Below this was a basement, originally used only for storage, but later adapted to use as a dungeon.

In 1216 Louis, Dauphin of France, captured Canterbury Castle but later retreated. In 1277 Jewish citizens of Canterbury were held in the castle before being expelled from England as part of Edward I's policy. In 1303 a group of 23 prisoners who were being held for murder were released on condition that they join the king's fleet in Scotland and returned to face trial after the conflict was over.

In 1380 Wat Tyler's rebellion raised the peasants and townsfolk of Kent and the southeast. A mob stormed the castle and forced the constable to publically burn financial and legal records and release prisoners. There was further discord during the Reformation when Henry VIII's advisor, Thomas Cromwell, had two priests held at the castle for 'permitting the Bishop of Rome's name in their books'.

But that was nothing to what was to follow. Henry's daughter, Queen Mary, had 42 people imprisoned at Canterbury Castle and put to death for their refusal to follow her Catholic faith. But we're getting ahead of ourselves ....

After Henry II built his new castle at Dover, Canterbury Castle declined in importance and became used primarily as a prison, under the control of the Sheriff of Kent. By the 13th century, a new ground-level gate was created on the south-east side.

By the 17th century, the castle had fallen into ruin. In 1609 James I granted it to Sir Anthony Weldon, and in 1730 a new County Session House was built on the site of the medieval great hall.

In 1825 the castle was used by the Canterbury Gas Light and Coke Company as a storage depot for coal and coke, and later a large water tank was set up on the ruins of the keep. In 1901 the castle was described as 'a most miserable discoloured ruin, its Cyclopean walls begrimed with soot and filth.' Thankfully the castle was purchased by Canterbury City Council, who have restored it to its current condition.

The builders of the keep walls made heavy use of old Roman tiles and bricks, in addition to local flint. Note the decorated courses of the walls; these are made from Quarr stone, a distinctive stone from the Isle of Wight. Stores of Quarr were depleted by the 12th century and can only be found in early Norman buildings.

Near the southwest corner of the keep is a small section of the 3rd-century Roman town wall.

Little remains in the interior, though the foundations of inner chambers can be seen, and the recesses which held the floor timbers. One tower stair still rises to the full height of the castle, allowing excellent views of the interior and across the city.

More self catering near Canterbury Castle >>