HERITAGE HIGHLIGHTS:   The ruined fortress of Sutton Valence Castle looks out over the Stour Valley 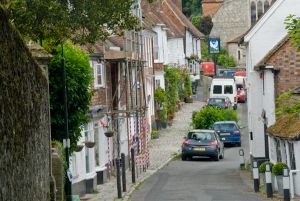 A lovely historic village high above the Kentish Weald, Sutton Valence must have been settled as early as Roman times. A Roman road runs through the parish and a Roman cemetery has been found nearby. An intriguing historical mystery is provided by the name of a playing field known as Bloody Mountain. This name is thought to be a reference to a Saxon battle fought at the site.

At that time the village was known simply as 'Sutton'; the 'Valence' part was to come later, as we shall see.

A noble by the name of Fulk de Breaute was granted the manor of Sutton by King John. He later received approval from Henry III to hold a three-day market each year. Over time this market came to be one of the busiest cattle markets in Kent and lasted into the 19th century.

Fulk himself ran into trouble. He attacked and pillaged the abbeys of Bedford and St Albans. As part of the Runnymede settlement in 1215 that resulted in the Magna Carta, Fulk was banished overseas.

When that happened Henry III granted Sutton to the de Betun family. It eventually passed by marriage to the powerful Earl of Leicester, Simon de Montfort. De Montfort rebelled against the crown, and after initial success, was defeated and killed at the Battle of Evesham in 1265. The king then granted Sutton to his own half-brother, William de Valence, Earl of Pembroke. The manor then became known as Sutton Valence.

By this time there was a small castle keep at Sutton, a 12th-century fortress on the edge of a ridge looking out towards the Weald. It was probably William de Valence who developed the castle into a more sizeable fortress and residence. Today, however, little remains of the castle beyond the shell of the keep, though the walls do stand to a good height. The castle is an open site, accessible at any time.

The church was in the hands of the lords of Sutton Valence until 1396, when it was granted to the Prior and Convent of Leeds. At the Reformation Henry VIII granted it to the Dean and Chapter of Rochester, but in 1914 it finally passed to the Archbishop of Canterbury, where it remains. A famous carved medieval altarpiece from the church was purchased by the Victoria and Albert Museum in London, where it can be seen today.

There are a wealth of historic buildings in Sutton Valence, including the Kings Head Inn, which dates to the middle of the 16th century. On the High Street are a mix of historic and more modern buildings that make up Sutton Valence School, one of the oldest schools in England. The school was founded in 1576 by William Lambe, a native of the area. Among the buildings is a row of 16th-century almshouses founded by Lambe to provide housing for retired clothworkers.

On Broad Street is a lovely half-timbered cottage known as Valence House, built in 1598. Much older still is Heaven Cottage, a fascinating Tudor building on 14th-century foundations. The house may actually be much older still, for traces of a Roman road have been found running through the garden.

On a more humorous historical note, there is a memorial in the churchyard to John Wilkes, who lived at Belringham on Headcorn Road. Wilkes is credited with first introducing round-arm bowling to the game of cricket in 1822. At that time all cricket deliveries were bowled underarm.

Wilkes apparently came up with his novel idea when playing with his sister, whose voluminous skirts would not allow her to use a conventional delivery. He tried bowling round-arm in a match at Lords, but his new idea was not well received; his delivery was called a no-ball, whereupon he marched off the field and refused to play the sport again.

More self catering near Sutton Valence >>