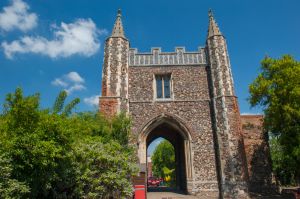 An extravagant early 15th-century gatehouse, the last surviving part of the powerful Abbey of St John at Colchester. The gatehouse was built around the year 1400 to create a more elaborate defence around the abbey grounds following the upheavals of the Peasant's Revolt.

The gate stood in the middle of the northern boundary wall of the abbey. The abbey itself is long gone, a victim of the Reformation, but much-repaired sections of the precinct wall can still be seen near the gate.

The gatehouse is a rectangular structure, pinnacled at each corner, and featuring traditional East Anglian flushwork construction.

The abbey was founded around 1095 by Eudo Dapifer (aka Eudo fitz Herbert), Constable of Colchester Castle and steward for three Norman kings ('Dapifer' is Latin for 'steward'). Dapifer's foundation was dedicated to John the Baptist and thus became more popularly known as St John's Abbey. In 1120 Eudo Dapifer died and was buried in the abbey he had founded. The site of his final resting place is unknown.

When Henry VIII tried to dissolve St John's, the abbot, Thomas Marshall, refused to hand it over to the king's commissioners. The abbot was tried for treason and hanged outside the abbey gates.

After the Dissolution of the Monasteries forced the closure of the abbey the gatehouse formed part of a mansion belonging to the Lucas family. The Lucas's were staunch Royalists, and Sir Charles Lucas, the owner of the gate, commanded the Royalist troops inside the town during the Civil War siege of Colchester (1648).

The gatehouse was bombarded and later attacked by Parliamentary troops, suffering heavy damage in the process. In the 1660s it was briefly used as a gaol for housing Dutch prisoners of war. Over the next century, most of the abbey buildings were pulled down, leaving St John's Gate as the only substantial remnant of the once-powerful monastery.

It's not that easy to find the gatehouse; there seems to be a shortage of signs from nearby streets. We visited on foot as part of a walking tour around Colchester. The easiest access for was via the pedestrian walkway at the south end of Abbey Gate Street. This takes you under the busy A34 (Southway) to St John's Green.

Bear left around the south (top) end of the wide green and you will see the gatehouse come into view. You can walk under the vaulted gateway passage and view the structure from the south side - just beware of vehicles as there is a parking area at the top end of the gateway!

My first view of the gate was accompanied by a gasp. It is so large it looked from a distance like a church, or at least a small building, topped by striking pinnacles at each corner. The term 'gatehouse' conjures up a vision of a simple passage through a wall. This is anything but a simple passage!

The flushwork exterior is in beautiful repair, and it is hard not to feel a sense of admiration for the medieval craftsmen who created it. Walk under the large gateway arch and look up; the vaulted ceiling is a gorgeous example of medieval style.

At each corner, the vaulting descends to a carved corbel. These are worn and rather covered in grime, but the carving at the north-west corner is a magnificently grotesque mythological beast. From inside the passage you can look through a barred gate to a side chamber, presumably used by guards manning the gate. 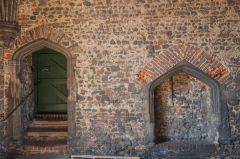 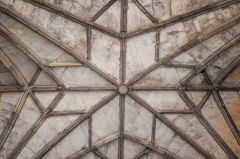