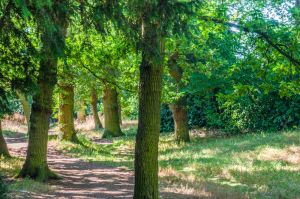 Lexden Earthworks is a network of Iron Age earthwork banks and ditches built to protect Camulodunum, the pre-Roman town of Colchester. Nearby are a series of pre-Roman burial sites. Among these is the Lexden Tumulus, traditionally thought to be the grave of the British chief Cunobelinus.

The tradition is supported by the finding of The Lexden Medallion, a silver medallion found within the tumulus which bears the likeness of the Roman Emperor Augustus. It is thought that the medallion was a gift from the Emperor to a local chief around the year AD 15. The medallion is in the Colchester Castle Museum. The Lexden Tumulus is a round barrow, originally a Bronze Age construction, but was later reused in the Iron Age.

I'll have to be honest; I was disappointed with our visit to this pair of sites. Parallel trails run along the edge of the Bluebottle site, one on top of the earthworks and one running at the base. You can catch glimpses of the open fields contained by the earthworks through a band of trees and foliage, but it is hard to get a real grasp of the site.

Evidence of the earthwork itself is rather difficult to make out, though there is an obvious and very extensive slope of the ground. However, so much is covered in undergrowth and trees that it is quite difficult to make out the actual structure and course of the banks. 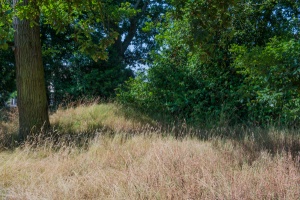 Remains of earthworks at Lexden

It is even harder at Lexden Earthworks, which is quite overgrown with trees and bushes. At least the trees are spaced widely enough that you can make out - with the aid of some imagination - the triple earthworks that helped contain the site.

However, there is just one general information panel on Lexden Straight Road, and no further information on the site, so unless you are investigating with the help of a knowledgeable local guide you are unlikely to come away having learned very much about the history or archaeology of the earthworks or the pre-Roman settlement here.

I don't wish to be too negative here; I am glad I visited, but so much more could be done to make both sites more accessible and to help convey more of the history and archaeology associated with the area. There is no indication on either site, for example, of how to find Lexden Tumulus.

So perhaps I can best sum up this pair of sites by saying that they together form an interesting part of the important and impressive pre-Roman archaeology of Colchester, and perhaps more will be done in future to convey that archaeology to an interested audience. 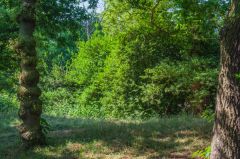 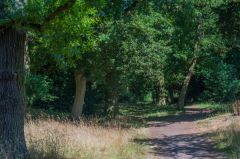 More self catering near Lexden Earthworks and Bluebottle Grove >>

More bed and breakfasts near Lexden Earthworks and Bluebottle Grove >>