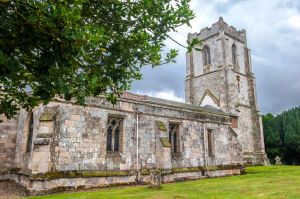 The parish church of St John's in Harpham was built by Sir William St Quintin in the 14th century to replace an earlier Norman church on the site. It is dedicated to St John of Beverley, a Saxon saint who was born in the village around AD 640.

St Quintin added the north chapel, which houses tombs to many of the family, and added the west tower. The nave is 12th century, with 14th-century windows. Three medieval mass dials are set into the south wall.

The most interesting interior features are the St Quintin tombs. The first of these is a very fine chest tomb of William St Quintin, topped by a carved alabaster slab and set beneath a beautifully carved ogee canopy in the wall between the chancel and north chapel. Sir William's memorial is dated 1349 and shows beautifully incised figures of a knight and lady who is thought to be Joan de Thwing. 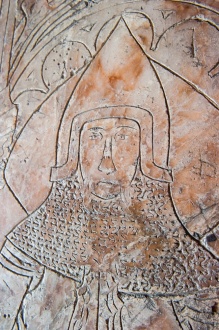 In the north chapel there are two beautifully preserved 15th-century brasses set into the floor. You might not spot these at first for when I visited they were hidden beneath woven floor mats. Just pull the mats aside and feast your eyes.

Nearby is a medieval table tomb with an effigy of a woman in a long, flowing gown, set in a low wall niche. We do not know who she is, but the tomb was probably discovered when the St Quintin family vault under the chapel was built. There are further wall monuments to St Quintins covering hundreds of years.

Of a much later date are lovely stained Georgian glass windows by William Peckitt of York, bearing the arms of the St Quintins from 1066 all the way up to 1795. 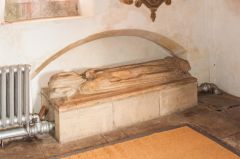