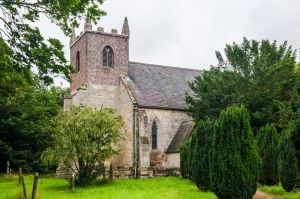 Lowthorpe's historic parish church is hidden at the end of a leafy lane, seemingly lost in time, oblivious to anything outside its small churchyard. Its one of those churches that seem to emit a sense of age and the poignant passage of time. Or maybe it's just me!

The signpost pointing down the lane to the church says 'Church and ruined monastery'. That's perhaps overstating things a bit. There was never a monastery at Lowthorpe, what there was instead was a chantry college served by a rector and six priests.

The chantry was founded in 1333 and lasted until the Reformation in 1548. The former chancel at the east end of the church is a roofless ruin, open to the elements. There are several worn and crumbling table tombs and grave slabs within the chancel, all mouldering away. Apparently, the chancel was abandoned in the Georgian period, as the village diminished in size and wealth. Now its a rather sad and lonely sight.

The remainder of the church is a bit more cheerful, however, and contains an intriguing table tomb just inside the door. This tomb has a remarkable effigy of a couple lying beneath a sheet, from which emerges a tree.

The branches of the tree terminate in the carved heads of thirteen children, arranged around the edge of the tomb. I can't state categorically that this is a completely unique tomb, but I've never seen another like this anywhere in England.

Affixed to the west wall above the head of the tomb is a large section of a cross head, carved in intricately interwoven strands in a Saxon or Celtic style. This was found in the churchyard in 1934. In the churchyard stands a medieval cross, brought here from Kilham when that village lost much of its population during the Black Death.

More self catering near Lowthorpe Church >>