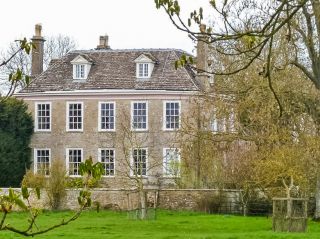 Buscot Old Parsonage
Buscot Old Parsonage is a lovely 18th-century parsonage located beside the River Thames. In 1703 an existing building on the site was extended in local Cotswold stone to create the attractive rectory we see today.

The Old Parsonage stands near Buscot Park Estate, in a beautiful rural setting in the upper Thames Valley. Beside the house is a small walled garden. The house is storeys high with an attic and cellar. It has a facade five bays wide, arranged symmetrically under dormer windows. The entrance was originally on the south front but was later moved to the east (on the house's end).

To the north is a service wing which formed the earlier house. This is one storey high with an attic and is built of rubble stone under a hipped roof.

Interior highlights include a cantilevered staircase with a handrail made of elm and featuring turned balusters. Several rooms have moulded stone-built fireplaces.

A former occupant was Peter Francis Carew Stucley (1909–1964). In his will, Stucley specified that the house should be rented furnished to American citizens actively pursuing literary, artistic or academic studies. Stucley was an avid art collector, specialising in contemporary art of the 1950s and 60s.

Examples of artwork in Stucley's collection adorn the Parsonage walls. A group of paintings is by Cecilia Sternberg, nÃ©e Countess von Auguste Cecilia Diana Theodora van Reventlow-Criminil (1908–1983), the mother of a former tenant.

The property is tenanted but can be visited by written appointment with the tenant. See details on the National Trust website.

The Old Parsonage is on the A417 about two miles east of Lechlade and four miles from Faringdon. It is very close to Buscot's old parish church. There is a small lay-by outside the property entrance.