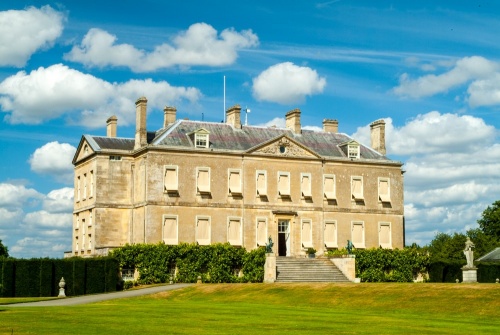 Buscot Park is a late 18th-century neo-classical house, set in lovely landscape gardens and parkland. Within the house, owned by the National Trust but administered by Lord Faringdon, are displayed fine furniture and art of the very highest order, including the Faringdon Collection, a superlative collection of Old Master paintings and Pre-Raphaelite artwork. In the grounds is a lovely 20th-century water garden composed of canals and classical bridges.

Buscot house was built in 1779 by Edward Loveden Loveden, using the services of architect James Darley. Darley built in the then-popular Palladian style, drawing on Italian influence to create a building that is surprisingly understated yet elegant in appearance. The south frontage looks out across parkland, and the north offers magnificent views across a 20-acre lake. 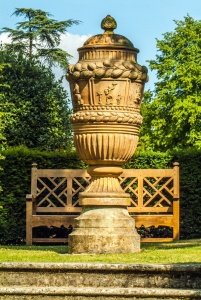 Loveden was an interesting character, who earned the moniker 'Old Father Thames' for his role in improving navigation upon the River Thames. His work was largely tinged with self-interest, for the fees from vessels using Buscot Lock earned him a hefty income.

Despite this income, and further wealth accrued from marriage to three wealthy heiresses, Loveden was heavily in debt, partly because of the money he spent on Buscot Park.

The house interior is magnificently ornate, with classical decorative elements and gilding throughout. Pride of place in the interior goes to The Faringdon Collection. This is largely the work of Gavin Henderson, grandson of the 1st Lord Faringdon, who was an avid art collector.

Henderson amassed a superlative collection of paintings, including works by Rembrandt, Joshua Reynolds, Rubens, and Edward Burne-Jones, among many others. This artwork was augmented with a 19th and 20th century British paintings and drawings, making the Faringdon Collection one of the finest in Britain.

In 1859 Buscot was purchased by Robert Campbell. Campbell's eldest daughter, Florence, married Charles Bravo. In 1876 Bravo died of antimony poisoning, and Florence was charged with his murder. The court case that followed was one of the most sensational of the Victorian period, with revelations of Florence's illicit affair with a prominent physician.

After five weeks of courtroom drama, the jury was unable to reach a find sufficient evidence to name a murderer, and Florence was released. The case has been the subject of numerous books, including one by mystery writer Agatha Christie, and much speculation.

There are several distinct gardens at Buscot. The earliest gardens were begun just as the house was being finished. The design was English landscape garden with the 20-acre lake being the most prominent feature. A classical bridge was built at the far end of the lake to provide a focal point. 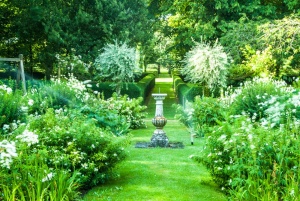 The most prominent is the 20th-century water gardens, one of the finest in England, laid out on a sloping lawn below the 18th century stately home. This is the work of Harold Peto, who was greatly influenced by Italian Renaissance design.

Peto joined the north terrace, where the house was built, to the lake, using a series of small canals crossed by footbridges. Beside the canals are garden rooms formed by clipped hedges. The effect is surprisingly peaceful; the symmetry of the formal canals softened by the greenery. There are classical garden ornaments at every turn and a variety of flowering plants and shrubs providing colour and shelter.

The National Trust does offer a children's quiz for the house interior. Beyond that, there is plenty of open space outside in the parks and gardens for children to run around, but no special children's amenities. Our children, aged 5 and 11, really enjoyed the water gardens, especially the small footbridges across the canals. They also enjoyed a swinging garden seat in the lower gardens. 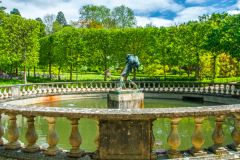 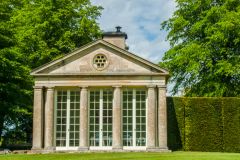 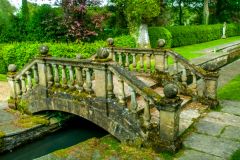 More self catering near buscot House