HERITAGE HIGHLIGHTS:   The most famous archaeological site on Anglesey 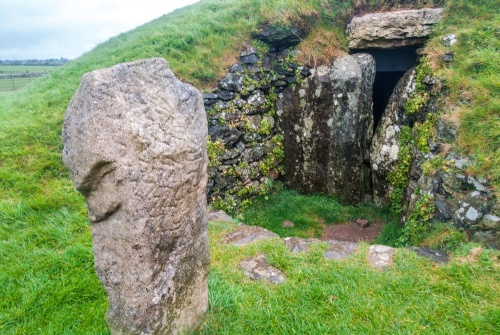 Bryn Celli Ddu is a very well-preserved megalithic mound tomb, one of the finest in Britain. The earthwork mound was once surrounded by a stone circle, which seems to have been destroyed in the construction of the tomb.

A solitary standing stone still stands before the entrance to the tomb.

Bryn Celli Ddu - the name translates as 'the Mound in the Dark Grove' - is probably the most famous prehistoric site on Anglesey, an island known for its outstanding collection of ancient archaeological sites.

Bryn Celli Ddu seems to have been built around 3,000 BC. This first phase involved creating a ritual enclosure, or henge, consisting of an earthwork bank outside an inner ditch, and within the ditch was a circle of standing stones. The inner ditch has been measured at 21 metres across. Only the outer edge of the ditch has survived, and the bank has been lost completely, but you can still see several of the upright stones within the ditch. 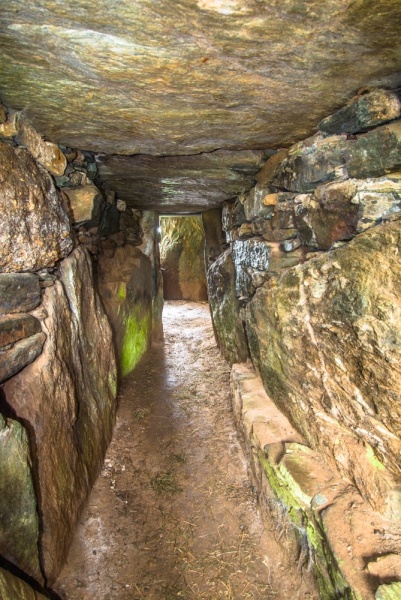 Near the end of the Neolithic period the site was altered when a large passage tomb was erected. This consisted of a large earthen mound, pierced by a long, stone-lined passage. The passage led to a stone chamber. Archaeologists found a mix of burnt and unburnt human bones in the passage. Other finds included quartz pieces, arrowheads, seashells, and a stone bead.

Investigators also discovered a decorated stone near what appears to be a ceremonial pit within the chamber. A replica of the carved stone has been erected for visitors to get a sense of the decorative carvings.

The tomb mound was explored in the Victorian period but the first serious archaeological investigation took place in 1928. 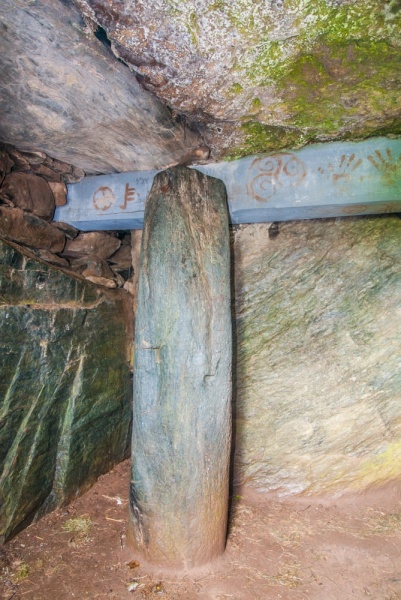 Unique among sites on Anglesey, the passage at Bryn Celli Ddu is carefully aligned so that on the midsummer solstice, the longest day of the year, shafts of sunlight will travel the length of the passage and reach the inner chamber. Exactly what ceremonial purpose this alignment served is uncertain, but it is clear that marking the midsummer solstice was important to the Neolithic builders of Bryn Celli Ddu.

Bryn Celli Du is in the care of CADW, and, as of this writing, is free to enter. 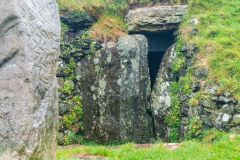