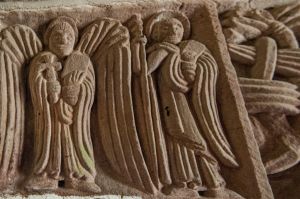 A simple country church dating to the early 12th century, boasting superb Romanesque carving by the Herefordshire School of craftsmen. St Peter's consists of a Norman nave and chancel, with a three-stage west tower topped by a pyramidal roof.

The best features of the church are the beautifully carved south door and the chancel arch. The south door was created about 1130. The outer moulding is in three layers, and only mildly adorned. However, the tympanum is another story; here you will find a superbly crafted figure of Christ in Majesty, a familiar theme found all across Europe in 12th-century carving. Christ is represented seated inside a mandorla, or oval, supported by angels. The quality of the carving places it among the finest Romanesque works in Britain.

The chancel arch is likewise adorned with carvings by the Herefordshire School. The column capitals are richly ornamented and extend in a frieze to two carved panels depicting St Peter, to whom the church is dedicated.

On the left (north side) of the arch he is shown in prison, accompanied by an angel, while on the right (south) he is shown upside down, again with an angel, as tradition holds that he was crucified in that position. Again, like the tympanum on the south door, the carving is of superb quality and seems ready to leap right out of the stone. There are bird carvings amid foliage facing the corner of each capital. 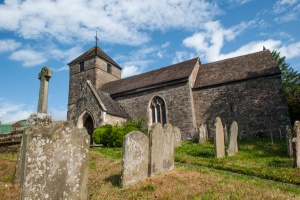 The south exterior of the church

By comparison to the superb 12th-century embellishments at Rowlstone, the font is subdued, even plain. It is a simple bowl basin, also probably 12th century.

The interior windows of St Peters are deeply set and wide splayed, again showing the early date of the church construction, and how little it has changed over the centuries. There are a pair of extremely rare wrought iron candle holders thought to be 15th century.

These are made with two parallel bars divided by upright pieces of iron into 5 compartments, each one holding a candle on a spike.

Each compartment is decorated with figures of hens or cocks (on the north of the chancel) and peacocks (on the south). The east end of the church was rebuilt in the 15th century, with a large Perpendicular window inserted in the east wall. The interior was reroofed in the Elizabethan period when the west tower was added.

The church may have originally had a semi-circular apse at the east end, but this no longer exists. In the churchyard stands a medieval cross upon a stepped plinth. The base is original but the shaft was rebuilt in 1905 as a memorial to a priest named George Atlay, who was murdered in Africa.

For more examples of work by the Herefordshire School, see our articles on Kilpeck, Shobdon, Eardisley, and Leominster churches. 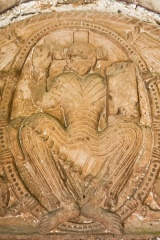 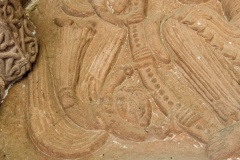 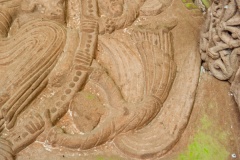 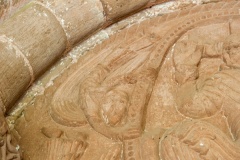 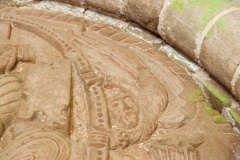 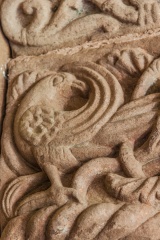 Bird on the east capital 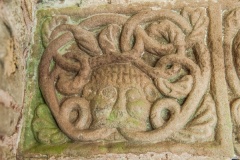 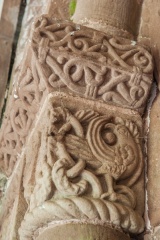 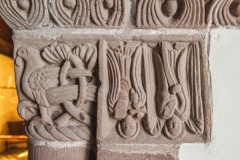 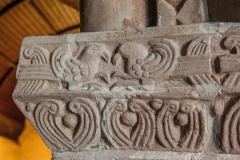 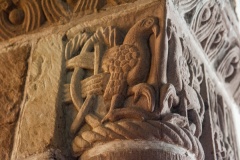 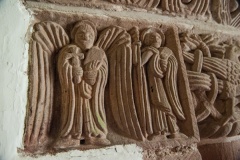 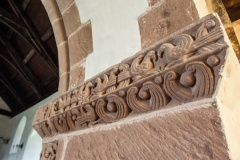 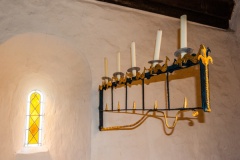 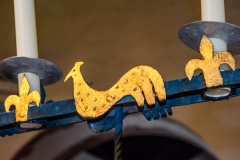 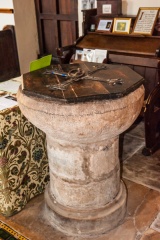 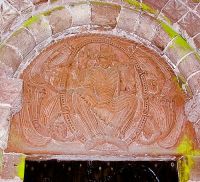