HERITAGE HIGHLIGHTS:   14th-century effigy of a woman holding a heart 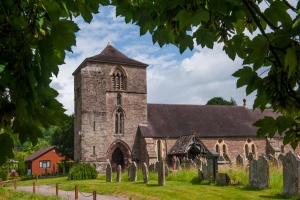 Over the centuries the Golden Valley of Herefordshire has seen its share of turmoil; located on the ancient border between England and Wales, the area has had a turbulent history and nowhere is that history reflected more than in the architecture of its churches, many of which were clearly intended to serve in equal parts as a spiritual haven and temporal harbour in times of trouble.

The church of St Michael and All Angels in the village of Ewyas Harold perfectly illustrates the point, with a partly detached tower built with walls fully 7 feet thick, looking across the Dulas brook to one of the first Norman-style castle mottes in Britain.

Early in the 12th century the church here was given to the Abbey of Gloucester (later to become Gloucester Cathedral) and a Benedictine priory was founded. This suggests that there was a church here at least as early as 1100, but the earliest part of the current building dates to the 13th century.

The monks provided a parish priest to the church and a chaplain to the nearby castle. The Bishop of St David's and the Abbot of Llandaff both claimed the estate in the 12th century, and the abbot even journeyed to Rome and appealed to the Pope to support his claim.

The Pope agreed with the Abbot, but St David's still claimed Ewyas Harold, and it was not until 1858 that the church was 'moved' to Hereford from the diocese of St David's. There was also continual strife between the chaplain at the castle and the vicar of St Michael's, and the chaplain was told in no uncertain terms that he was 'to interfere in nothing, great or small' in the parish. 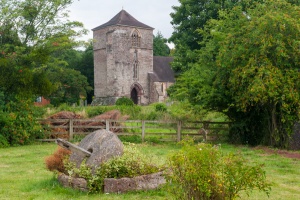 Perhaps we can infer something of what life was like in medieval Ewyas Harold from the complaint of a 14th-century abbot of Gloucester that monks sent to Ewyas for even a short period returned so debased as to corrupt their brother monks. Rather than laying the blame for this on the monks themselves, he blamed the local Welsh inhabitants of the parish.

The history of the church and castle are inextricably entwined; the castle was torn down by Earl Leofric in 1052, but it was granted to Alured of Marlborough after the Norman Conquest, and Alured rebuilt the earlier fortifications. In the early 12th century the castle was in the hands of Harold of Ewias, who gave his name to the village.

Harold's son Robert founded the nearby abbey at Dore. The castle and manor passed to the Tregoz family through Robert's granddaughter Sybil, whose first husband was Robert Tregoz, who fought (and died) with Richard the Lionheart.

Their son, another Robert, married the sister of St Thomas Cantilupe of Hereford. Robert died at the Battle Evesham in 1265, fighting for Simon de Montfort. He was succeeded by John Tregoz, and the bulk of Ewyas Harold church was built during John's lifetime. 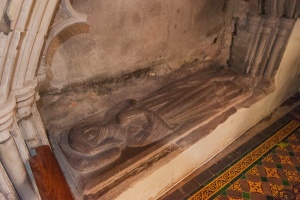 The castle passed through Treogoz to the Grandisson family through marriage, then to the powerful Beauchamps. In 1403 Henry IV granted William Beauchamp permission to refortify Ewyas Harold castle against Owain Glyndwr. The castle survived repeated assaults but was never strategically important after Glyndwr's rebellion petered out. By the mid 16th century it was a ruin, and in 1645 a traveller described it as 'now ruined and gone'. 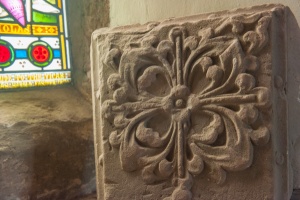 Long before that date the Benedictine priory at Ewyas was gone, suppressed in 1358, with all revenues going to Gloucester Abbey save enough to maintain a parish vicar. So we know exactly when the first actual vicar of St Michael's started his service; it was in June, 1359, and his name was Bartholomew of Strode.

The vicar was entitled to the 'lesser tithes' of the parish, while the 'great tithes' derived from arable farming in the parish were sent to Gloucester Abbey directly (and after the abbey was dissolved in the Reformation, to the Bishop of Gloucester).

The tower is 13th century, and its most obvious feature - aside from the thick walls - is a finely carved south doorway, with double-chamfered arch. Above the doorway is a two-light window with geometric tracery. In the early 19th century the tower served as a Dame School - a form of private elementary school taught by local women. 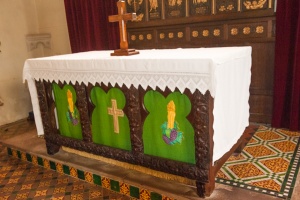 Like the tower, the chancel is 13th century, with a pair of lancet windows of that date in the south wall and another from the following century. There are 17th-century chairs by the altar, behind which is a reredos with four fascinating panels, 2 Flemish from about 1530 and 2 17th century German works.

The nave roof was restored in the Victorian period, but it re-uses original 13th and 14th-century timbers. The pulpit has two panels of 17th-century carving and several of the pews are also 17th century.

In the churchyard is a 15th-century cross, now very worn. Though the churchyard is peaceful now, it was not always so; in 1645, at the height of the Civil War, a band of Parliamentary soldiers defeated a group of local Royalists here, killing several. One Royalist supporter was later hanged from a nearby tree. 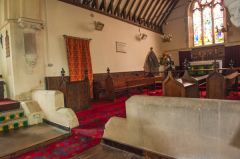 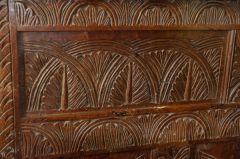 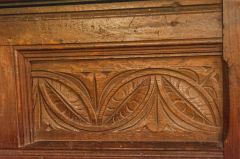 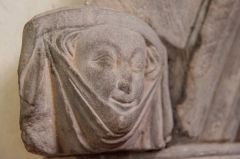 More self catering near Ewyas Harold

Self Catering near Ewyas Harold