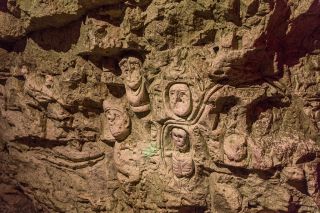 Chislehurst Caves
An astonishing maze of underground tunnels and caverns runs deep under Chislehurst, created by the mining efforts of ancient inhabitants over the course of 8,000 years.

The first mines at Chislehurst were begun around 6000 BCE as our ancestors dug for flint to use in making tools. Those ancient mines were extended in the Roman and Saxon periods to produce a labyrinthine tangle composed of over 20 miles of passages.

Later miners searched the chalk soil for deposits of lime for use in plaster and whitewash. The mines were last worked in the 1830s, but by the late 19th century the caverns and tunnels at Chislehurst had become a popular tourist attraction for Victorian visitors.

In WWI the mines were used as an ammunition depot, an outpost of the Woolwich Arsenal. A narrow-gauge railway was established to speed up the movement of goods through the tunnels.

During WWII the mines were used as a large air-raid shelter; in fact, Chislehurst was the largest shelter outside London. Guided tours take visitors through the three main sections of the caves, separated into 'Druid', Saxon, and Roman areas.

More self catering near Chislehurst Caves >>