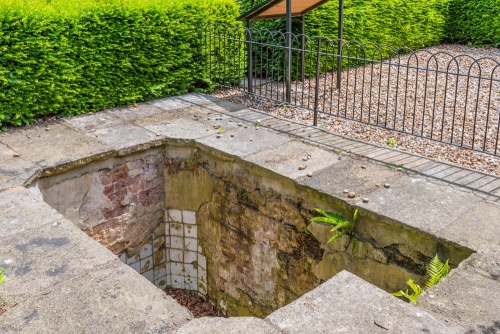 Tucked against the wall encircling historic Greenwich Park is an 18th-century sunken bath, all that remains of Montague House, the home of Caroline, the Queen consort of the United Kingdom and wife of the Prince Regent (later George IV). The bath stood outside the house in an area of parkland enclosed by Caroline when she acted as the Ranger of Greenwich Park.

It was an ill-fated match from the start. The couple became engaged in 1794 - even though they had never met. Prince George agreed to the marriage only because he was heavily in debt, and by contracting an alliance with a suitable princess Parliament had agreed to increase his allowance, enabling him to pay off some of the debt.

Perhaps it is no surprise then, that George reportedly called for a glass of brandy after meeting his future wife for the first time. If George was disappointed in his bride-to-be, so was Princess Caroline, who reportedly told Lord Malmesbury that her future husband was 'very fat and nothing like as handsome as his portraits'. It didn't help that George had his mistress, Lady Jersey, appointed as Caroline's Lady of the Bedchamber.

The couple married in 1795 but separated in the following year, shortly after the birth of their only child, Princess Charlotte of Wales. 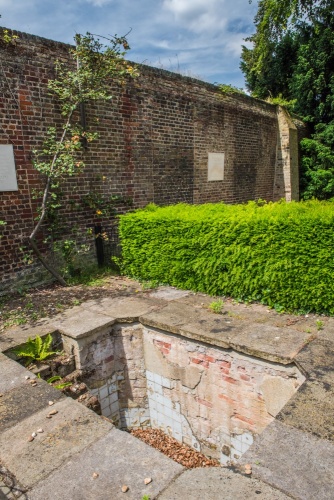 The bath from the south-east

In 1798 Princess Caroline took up residence at Montague House in Greenwich (alternatively spelled as Montagu without the final 'e'). The house had been built in the late 17th century for Ralph Montagu, the 1st Duke of Montagu. The Princess took up a lease from the 3rd Duchess of Buccleuch, Lady Elizabeth Montagu.

There she lived until 1812 (though some historians think a date of 1814 is more likely) and her daughter Princess Charlotte lived with her governess at nearby Ranger's House. Caroline was appointed as the Ranger of Greenwich Park in 1806, as was her daughter Charlotte several years later.

Caroline's stay at Montague House was plagued with stories of infidelity and the rumour that she had given birth to an illegitimate child. The rumours sparked a 'Delicate Investigation' into the Princess' conduct. Though the investigation was supposed to be secret, the story was leaked to the press. The investigation exonerated Caroline, but her access to Princess Charlotte was heavily restricted.

Her social standing suffered, though, and she and her estranged husband engaged in an increasingly bitter battle of public innuendo and character assassination. Caroline was desperate to leave Britain, and in 1814 she accepted an annual allowance of £35,000 to live abroad. 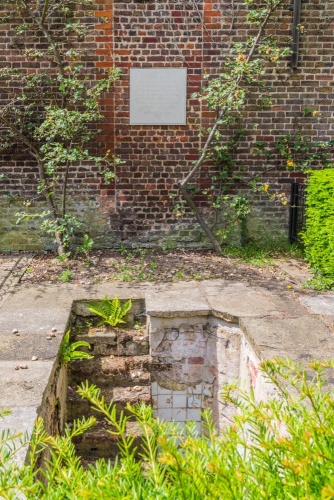 The bath from the east

King George III died in 1820 and Princess Caroline sped back to England, only to face an extraordinary investigation in Parliament into her conduct. However, the new king was exceptionally unpopular with the public at large, and almost by default Princess Caroline - now the Queen consort - found herself extremely popular. She was lauded, and her husband reviled.

That changed, however, when she made a public spectacle of herself trying to force her way into Westminster Abbey for the king's coronation in 1821. She fell ill immediately after the coronation and died three weeks later. 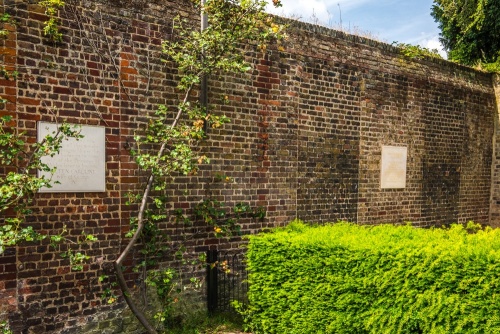 The wall is the last vestige of Montague House

Montague House was pulled down in 1815, not long after Princess Caroline's departure. The main body of the house stood where the tennis courts on Chesterfield Walk now stand. Only one section of the house wall stands, and it has been incorporated into the west wall surrounding Greenwich Park. You can see blocked up window openings in the wall.

Up against the wall is a plunge bath, installed after Caroline was named as the park Ranger in 1806. This area outside the walls of Montague House was part of the parkland enclosed by Caroline after her appointment. Here she installed a pleasure ground for relaxation.

The bath takes the form of an elongated rectangle with a set of steep stone steps leading down into a pool formed by brick with a tile facing. The area around the bath is paved with large flagstones.

The bath was filled in the 1980s and remained hidden from view until 2001 when it was excavated once more and preserved behind an iron railing and a high hedge.

On the wall above the bath is a plaque reading:

A bath beneath the paving and this wall are all that remain of Montague House, the home between 1801 and 1813 of the Princess of Wales, later to become Queen Caroline wife of George IV 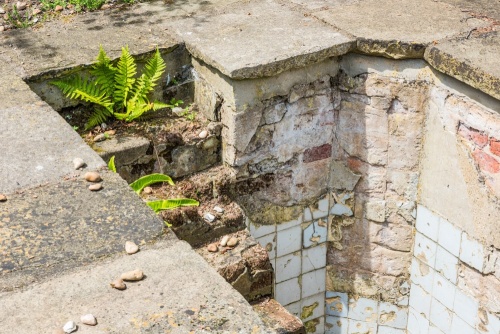 Steep steps lead down into the bath

On the wall to one side of the bath is a plaque commemorating the life of Ignatius Sancho (1729-1780), a former slave turned actor, composer, and writer. From 1749-1751 Sancho served in Montague House as the butler to the 2nd Duke of Montagu. Years later in 1766, Sancho returned to the house as a valet to the Duke's son-in-law, George Montagu.

Sancho became a symbol of the abolitionist struggle to end slavery. His letters, published after his death, are one of the earliest accounts of slavery written in English.

African man of letters
composer and
opponent of slavery.
Born on a slave ship he was
encouraged to educate himself
by John 2nd Duke of Montagu
and served as butler
to the Duchess
here in Montague House. 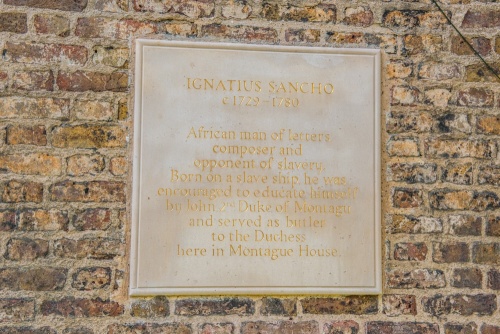 The nearest tube station is Cutty Sark (DLR), though Greenwich is just slightly further away. Just walk up to Greenwich Park and enter via St Mary's Gate on King William Road. Follow the western edge of the park past the Royal Observatory and you will reach the Rose Garden, overlooked by Ranger's House.

Immediately south of the Rose Garden enclosure you will find Queen Caroline's Bath, up against the park wall. If you are coming from the south, you will find the Bath just inside the Chesterfield Gate in the south-west corner of the park.