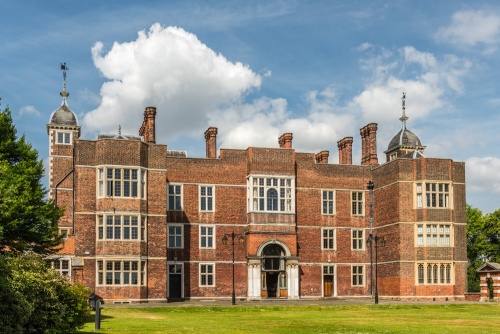 Charlton House is a stunning Jacobean mansion begun in 1607 by Sir Adam Newton. The house sits in lovely grounds that now serve as a public park. It is a remarkable survivor in a modern London suburb bordering on Greenwich.

Sir Adam built his new house at the top of a hill looking north to the River Thames and west to the city of London, a view that the diarist John Evelyn called, 'one of the most noble in the world, for city, river, ships, meadows, hills, woods and all other amenities'.

Sir Adam Newton was a Scottish scholar and the Dean of Durham. Around 1600 Newton was appointed by James VI of Scotland (the future James I of England) to serve as the tutor to his son Prince Henry. He acted as the prince's tutor until 1610 when the prince set up his own household. From that point, Newton served as the prince's secretary.

In 1605 he married Katherine, the youngest daughter of Sir John Puckering, whose son Thomas studied along with Prince Henry. She died in 1618 after giving birth to two sons. 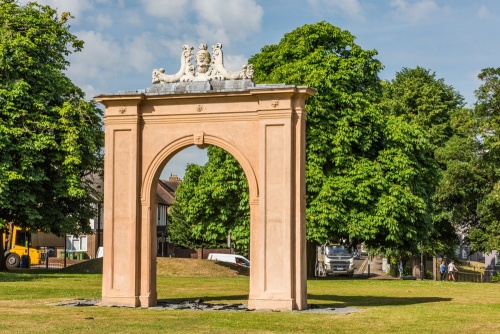 When James took the throne of England, Newton was granted English citizenship. In 1606 he bought the Charlton estate and he began to build Charlton House in the following year. Some historians think that Newton intended the house as a residence for Prince Henry. If so, he was destined to be disappointed, for the prince died in 1612 at the age of 18.

Today the mansion is surrounded by modern houses, but in 1607 Charlton was a rural retreat, little more than a hamlet, but with good access to London via the River Thames.

Sir Adam lived at Charlton House until his death in 1629. He is buried beside Katherine in St Luke's Church, where a large black and white marble monument commemorates the couple. 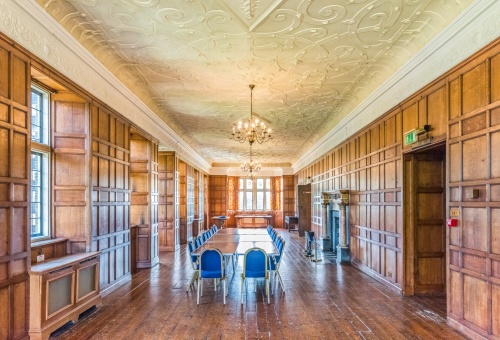 It passed through several owners until it 1777 when it became the property of Jane Weller, the wife of Sir Thomas Wilson. Their daughter, also named Jane, married the politician Spencer Perceval., who became Prime Minister in 1809. Perceval was assassinated three years later in 1812, the only British Prime Minister to die by an assassin's hand. Perceval was buried in St Luke's Church, just over the road from Charlton House.

In 1877 Spencer Maryon-Wilson added The Library, designed by the fashionable Victorian architect Norman Shaw to emulate the earlier Jacobean chambers, right down to the detail of the plasterwork ceiling.

The Maryon-Wilson family let the house to the military fr use as a veteran's hospital during WWI, and after the war they sold it to the local Council. Part of the estate grounds became a public park, while part was converted to an athletics track and a playing field. Charlton House is now cared for by the Royal Greenwich Heritage Trust, which also runs the Greenwich Heritage Centre, Tudor Barn, and nearby war memorials. 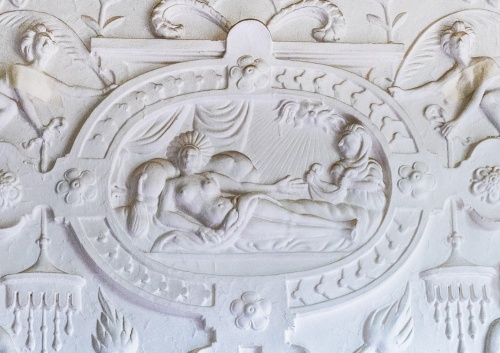 Fireplace overmantel in the Newton Room

In 1607 when Charlton House was begun new ideas from Europe were beginning to filter into England, ideas about symmetry and proportion that grew out of the Renaissance. Charlton House was one of the first English houses to incorporate these new Renaissance ideas and is a bridge between the earlier Elizabethan architecture and the classic Jacobean style that evolved over the next few decades.

The house is built of red brick to a double E design, with decorative chimney stacks and turrets. White stone is used for doors, windows and corner quoins. Projecting from the west front is the richly carved entrance porch. The house interior is stunning, with ornate plasterwork ceilings and richly carved fireplaces throughout. One very striking fireplace in the Jenkins Room is carved from oak.

The richly decorated porch gives access to the Minstrel Hall, which runs the depth of the house. This is now a cafe and an administrative area. At one end is a minstrel's gallery and over the east door you can see a plume of feathers - the symbol of the Prince of Wales. Like many rooms in Charlton House the Minstrel Hall has lovely flat strap-work designs on the ceiling.

Directly over the Minstrel Hall and identical in size, is the Grand Salon. Here the ceiling is decorated with ornate pendants. One bears the letters 'JR' for James, Rex (ie. King James). Another shows the Prince of Wales' coat of arms along with the Garter symbol and moto. The marble fireplace is decorated with figures of Venus and Vulcan.

Next to the Grand Salon are the White Room and the Dutch Room. The Dutch Room has a panelled ceiling with friezes depicting foliage, jewels, and fruit. The chimneypiece is a very striking piece, made from black marble. The White Room boasts a sumptuous fireplace and overmantel. The frieze over the fireplace depicts the Triumph of Death and the Triumph of Christ. In the centre is an oval panel with figures of Pegasus and Perseus bearing the head of Medusa. 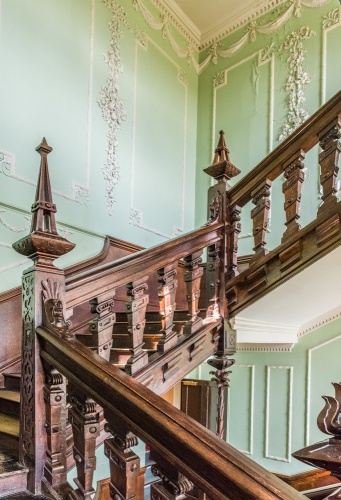 From the White Room you enter the Long Gallery, stretching 70 feet. Here the frieze running the length of the Gallery depicts a foliage pattern interspersed with figures of dogs and masks. The ceiling is beautifully decorated with strapwork designs. The ceiling was damaged by German bombs in WWII but thankfully the original moulds for the plasterwork were found intact in the basement and the damaged portions could be recast.

Beside the main house is a summer house, thought to have been designed by Inigo Jones in 1630. Jones is famous for his design of the Queen's House in nearby Greenwich. When we visited the summer house was looking sadly neglected and was fenced in to prevent entry.

Beside the summer house is a mulberry tree, planted on the orders of King James, which makes it one of the oldest mulberry trees in Britain. The king was very keen to establish a silk industry in England and encouraged his nobles to plant some 100,000 trees.

What the king did not realise is that silkworms prefer white mulberry trees and he had ordered black mulberry seedlings. It is no wonder, then, that his ambitious plans for an English silk industry faltered. London did become a centre for silk weaving, with most weavers based in Spitalfields, but they used mostly imported silk. 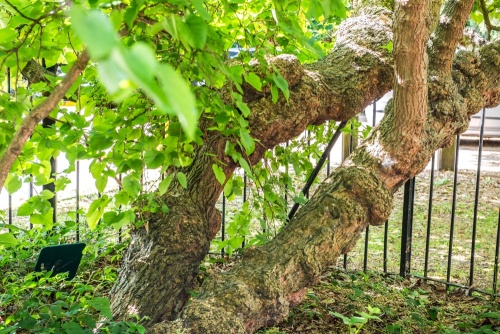 In the grounds (now the public park) east of the house is a ha-ha, a concealed ditch reinforced with brick. The ha-ha, installed in 1847, created a hidden barrier for livestock, separating the purely decorative part of the estate from the 'working' areas.

Other park features include three walled gardens, including a Sensory Garden, a Pond Garden, and the Peace Garden, opened in 2006 to honour Amnesty International's Stop Violence Against Women Campaign. Leading away from the Pond Garden is the Herbaceous Garden, where butterflies abound in summer. Stretching from the Herbaceous Garden to the park boundary is The Wilderness, with a winding, serpentine walk dating to 1765. 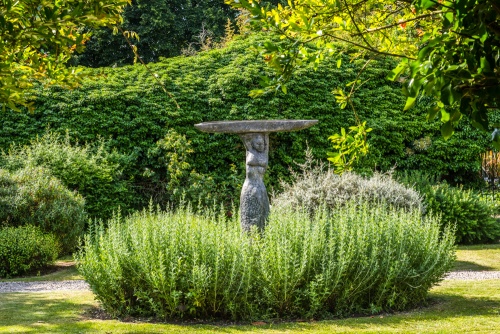 In the gardens near the house is the Roman Stone, brought from Italy by a member of the Maryon-Wilson family in the early 19th century. Despite the name, it is not a stone but a stone sculpture of a chest on a pedestal. The sculpture is topped with a stone acorn.

In front of the house, facing onto the B210 (Charlton Road) is a Renaissance archway, looking rather lost in the centre of the lawn. This arch once formed part of the original entrance into the Charlton House grounds.

Charlton House is used by the local council as an events venue, so parts of the house may be closed off if there is an event scheduled. One section is used by a local library, and some rooms are used for offices. When we visited the staff were very friendly and printed off a map of the house for me to carry around from room to room. We weren't disappointed; the Jacobean architecture is simply stunning. Charlton House deserves more attention as one of the most unusual and well-preserved 17th-century mansions in England.

The nearest rail station is Charlton, from London Bridge rail station. From the station exit turn right and walk up Charlton Church Lane. You will see Charlton House across the road as you reach the top of the hill. From the station to Charlton House is about 10 minutes. Alternatively, you can take the underground to North Greenwich (Jubilee Line) then take the 486 bus to Warren Walk. From there it is a very short walk uphill to the house. 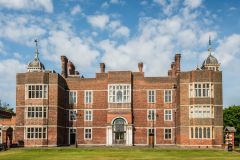 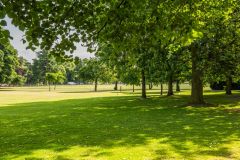 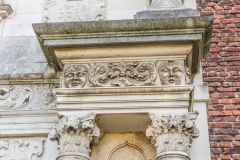 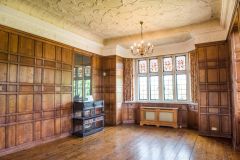 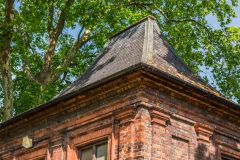 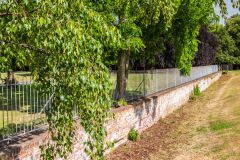 More self catering near Charlton House