HERITAGE HIGHLIGHTS:   The wonderful 16th-century painted wooden effigies of Sir Alexander Culpepper and his wife are rare in England. 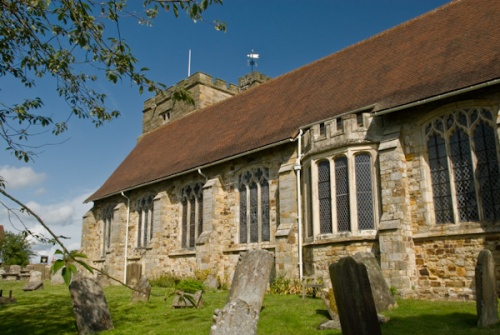 The earliest known church at Goudhurst was in 1117. The current St Mary's church is largely 13th century, enlarged in the 14th century. That is when an influx of weavers from Flanders arrived in the area. The tower rises to exactly 500 feet above sea level and provides fabulous views for miles. As a result, it was used as a lookout point during both World Wars.

The church contains a wealth of fantastic funerary monuments, many of them to members of the Culpepper family. The most interesting monument by far is that of Sir Alexander Culpepper and his wife, which dates to 1537.

This monument is a tabletop tomb, with painted wooden effigies of the deceased in beautifully detailed period costumes. The couple lies side by side. Sir Alexander is clad in a red and gold surcoat over armour. His head is bare.

His wife is portrayed in a black dress with a red cloak over, and an ornate headdress of the style familiar to anyone who has viewed Elizabethan portraits by Hans Holbein. The knight was known as 'Ould Sir Alexander'. His iron foundries at Bedgebury cast guns used against the Spanish Armada. 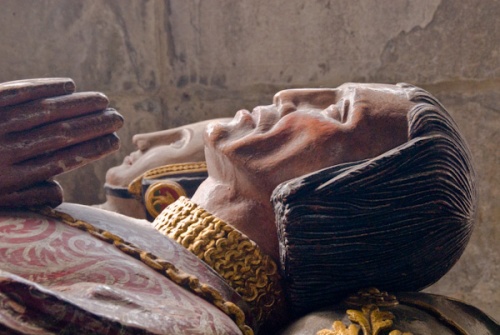 The Culpepper tomb is thought to be one of only 80 or so surviving wooden effigy tombs in the country; certainly, it is one of the most colourfully painted and is beautifully preserved. The memorial is raised up, but some kind soul has thought of visitors and provided a small step-stool so that you can climb a few steps up and get a very good vantage point to investigate the effigies.

Carved into the window jamb immediately above the Culpepper tomb is a small scene depicting kneeling members of the family with a likeness of St George slaying his dragon, and a Virgin and Child. This carving has been dated to 1537.

Other members of the Culpepper family are remembered with memorials in the Lady Chapel, sometimes called the Bedgebury Chapel. Here you can see the oldest memorial in the church; the brass of John Bedgebury (d. 1424), who may have fought at the Battle of Agincourt. Bedgebury is one of the oldest manors in England, with a grant dated AD 815. After John's death, the manor of Bedgebury passed to the Culpepper family.

The first Culpepper of Bedgebury was Sir John, whose brass memorial, dated 1480, is beside the altar. He is shown wearing armour of the plate and mail type.

Sir John's memorial is overshadowed by a quite wonderful alabaster Tudor monument to the Culpeppers. Four generations of the family are commemorated in this lovely memorial, carved in 1599. In an upper niche is Sir Thomas Culpepper, Sheriff under Edward VI. Beneath Sir Thomas is his son Alexander with Mary, his wife. 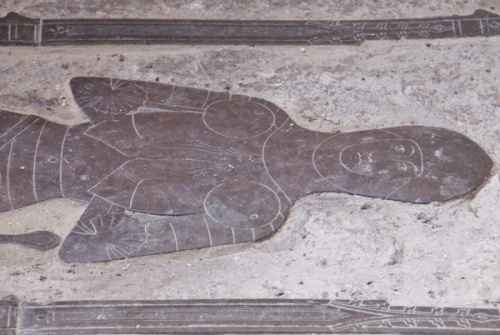 Sir Alexander Culpepper was an influential nobleman who was knighted by Queen Elizabeth. The queen is known to have visited him at Bedgebury. Beneath Sir Alexander is a likeness of his son Anthony, with his wife Ann, who was the daughter of the Mayor of London. At the bottom of the memorial are carvings of their sixteen children. kneeling in suitably reverential attitudes of prayer.

On the south wall of the sanctuary is another memorial, an Italian marble one of William Campion (d. 1665). In 1722 the Campion family donated the candelabra that still hangs in the nave.

In the north aisle is the so-called Bread Tomb, a ledger slab commemorating gifts of endowments providing food for the parish poor.

In 1747 Goudhurst church was the scene of high drama. This was the era when powerful gangs of smugglers held sway throughout much of Kent. The most notorious gang of smugglers was the Hawkhurst Gang, who exercised a reign of terror over the surrounding area.

The leader of the smugglers was a native of Goudhurst named George Kingsmill. Another Goudhurst man by the name of William Sturt formed a local militia to combat the smugglers. Kingsmill vowed to rout the militia and sent a defiant message that he was coming to deal with Sturt's men. Sturt sent all the women and children into hiding and deployed his men about the church, using the tower as a lookout.

In a fierce battle, the smugglers were defeated and Kingsmill shot and killed. Three members of the gang were caught and locked in the vestry for safekeeping. The lovely old Star and Eagle pub beside the church was also a scene of fighting in the struggle, which signalled the end of the Hawkhurst Gang's power.

Taken as a whole, the church of St Mary is a gem, set in a lovely and historic town that well repays a visit. 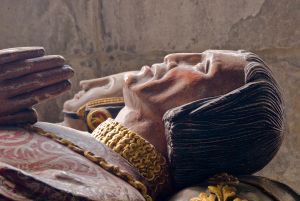