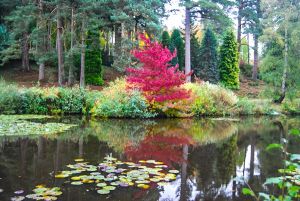 One of the most extensive and varied collections of conifers in the world grace Bedgebury Pinetum. Much attention has been paid to creating gardens with colour and varieties of plants to provide interest at every season of the year.

In 1the 1850s Viscount William Beresford began to plant a pinetum surrounding the Park House, a lodge in his Bedgebury estate. The estate itself dates to at least the 9th century and was once visited by Elizabeth I. Beresford's stepson developed Lady Mildred's Drive to enable visitors to the estate to comfortably view the pinetum from the comfort of their carriages.

In 1924 the Royal Botanic Gardens at Kew realised that growing air pollution in central London made caring for the National Conifer Collection increasingly difficult. They looked around for a suitable place for the conifer collection and settled on the Bedgebury estate because it already had the existing 19th-century pinetum in place.

The first new trees were planted at Bedgebury in 1925, centred on the valley around Marshall's Lake. From 1969 the pinetum has been managed by the Forestry Commission.

The Pinetum has over 10,000 conifers and other species, acting as a gene bank and genetic plant resource. There are over 2300 conifer species, including the tallest tree in Kent, an Abies grandis. The Pinetum holds 5 national collections, including thuja, Lawson's Cypress, juniper, yew, and Leyland Cypress. It also is home to more than 50 species that have been declared endangered.

The Bedgebury Pinetum is arguably the finest collection of conifers anywhere in the world and is set in a beautiful wooded valley with lakes and streams, gently rolling hills, and wide avenues giving visitors wonderful views.

There are nature trails through the woodland, as well as an adventure play area and cycling trails.

The Pinetum is open daily except at Christmas and during extreme weather conditions. There is an admission fee. 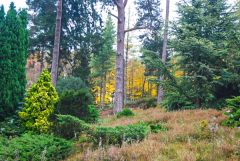 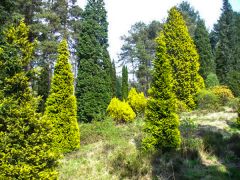 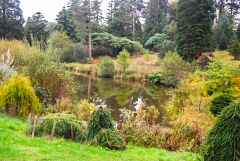 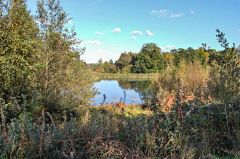