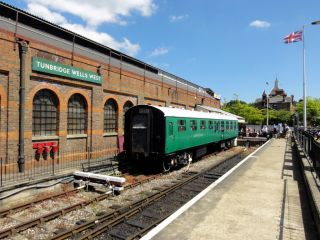 The station is located in a former engine shed at the old station. Here you will find a collection of locomotives and rolling stock, as well as a restoration workshop where you can watch historic engines and carriages being restored.

The train service stops at High Rocks, an ancient geological area of sandstone cliffs. The end of the line is at Groombridge, where passengers can alight to visit 17th-century Groombridge Place historic house, and gardens. A joint ticket covering Groombridge Place and the rail journey is available.

There are a number of special runs throughout the year, including a Santa Special, and a day out with Thomas the Tank Engine and his friends. Rail service is a mix of steam and diesel locomotives. There are no less than 12 steam engines, 10 diesel engines, and a variety of 'visiting' engines. Among the carriages are several formerly used by the London Underground.

Tunbridge Wells West Station was opened in 1866 by the London Brighton & South Coast Railway in direct competition to an earlier station at Tunbridge Wells Central (now the main rail station for the town). The station had rail links to London and the south coast at Brighton and Eastbourne. Due to decreased use, the line from Eridge to Tunbridge Wells closed in 1985.

The line was purchased by a preservation group named the Tunbridge Wells and Eridge Railway Preservation Society. This group merged with the North Downs Steam Railway to form the Spa Valley Railway. The combined efforts of many volunteers resulted in the reopening of the line to Groombridge in 1998. As of this writing, plans are underway to open the line as far as Eridge.