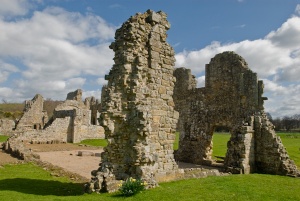 Bayham Abbey is an early 12th-century monastery founded by unifying small Premonstratensian houses from Otham (Sussex) and Brockley (Kent). The Premonstratensian order - known as the White Canons for the colour of their habits - was never as popular in Britain as other orders like the Benedictines or Cistercians, and Bayham is one of the few Premonstratensian monasteries in Britain. The Brockley monks came here between 1199-1208, and they were joined by the monks of Otham between 1208-1211, creating an abbey with 18 canons under an abbot.

The founder may have been Sir Robert de Tumeham, a rich Norman knight, and his wife, Ela de Saukeville (Sackville). Other sources list the benefactor as Ralph de Dene. The new abbey was originally called Beaulieu, which translates from French as 'beautiful place', not surprising when you see this lovely riverside setting. The name evolved to become Begham, and eventually, Bayham.

Building began on this site beside the River Teise around 1207, but many of the remains we can see today date from the late 13th century. Bayham is notable for the quality of medieval sculpture, and for its wonderfully picturesque setting, which gave rise to its nickname, 'The Fountains of the South', though it was never as rich as the original Fountains Abbey in Yorkshire! 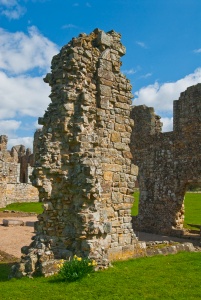 The abbey buildings were finished by 1234, and the bulk of the abbey ruins date to the 13th century. The abbey church was extended in the late 13th century, and a gatehouse was added in the following century.

Bayham received royal visits on at least two occasions; in 1299 when Edward I visited on a tour of Kent and Sussex, and in 1322 when Edward II stayed overnight on his way to Battle Abbey.

Unlike many monastic houses, Bayham did not even last to the Dissolution of the Monasteries under Henry VIII. It was dissolved in 1524 by Henry's chancellor, Cardinal Wolsey, to free up funds for Wolsey to found new colleges at Oxford and Ipswich.

The canons, not unnaturally, resisted, and there were riotous protests in front of the abbey before Wolsey had his way. Wolsey's new Oxford foundation was Cardinal College, later King's, and still later, Christ Church.

In 1530 the Dean and Canons of Cardinal College leased Bayham to William Wybarne, but when Wolsey fell from power they reverted to the crown. Around 1580 Queen Elizabeth granted Batham to Anthony Browne, Viscount Montague, one of her great favourites.

Over the next few centuries, Bayham passed from one family to another until in 1714 it was purchased by Sir John Pratt, and the Pratts have owned the Bayham estate ever since. John Pratt's son was named the first Earl Camden and served as Lord Chancellor of England.

The abbey ruins might have been left to decay in peace, undisturbed, but for the combined efforts of landscape gardener Humphrey Repton and architect William Wilkins. Together they created a picturesque, romanticised landscape based on the abbey ruins, which acted as an eye-catching focal point for Bayham Old Abbey House.

This is now known as the Dower House and is open to visitors as part of admission to the abbey. The interiors are sparsely furnished, but give you some idea of the elegant style of living that the family would have enjoyed.

In 1869 the Marquis of Camden constructed a new mansion across the river on the Kent side of the valley, and this also became known as Bayham Abbey, so that sometimes the abbey itself is called Bayham Old Abbey to distinguish it from the Victorian house! In 1961 the abbey was donated to English Heritage, though the land is still owned by the Camden family, descendants of the Pratts. 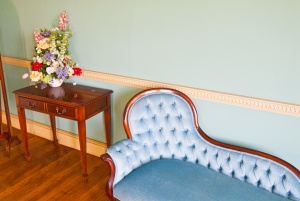 The monastic site is enclosed by a moat on three sides. This moat not only acted as a boundary to the abbey land, but it also drained the marshy ground. On the west side, there is no moat, only a bank and ditch. The abbey is directly on the border between East Sussex and Kent and is thought to have had an entrance gate facing each county. The ruined Kent Gate still stands, but there is no trace of a Sussex Gate.

Only parts of the monastic buildings survive, including sections of the church, chapter house, cloister, gatehouse, and monk's dormitory. The best-preserved feature is the south wall of the church nave, with three large arched windows, braced by thick buttresses. In addition to the main abbey buildings, parts of numerous outbuildings survive, including the bakehouse, mill, brewhouse, stables, stores, and barns. Further away from the abbey core are a fish pond, mill-leat, and garden beds.

We came here with our young children, and I think they were more interested in running around the wide green lawns of the abbey than learning about its history or architecture! They did enjoy the Dower House, though, with its elegant rooms. The location beside the river is quite fabulous, and you can see why Bayham was sketched by artists like JMW Turner; it really is a lovely site. 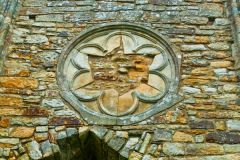 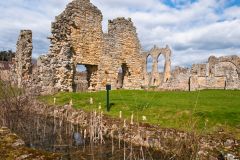 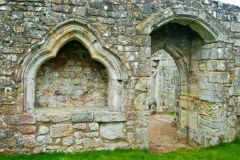 More self catering near Bayham Abbey