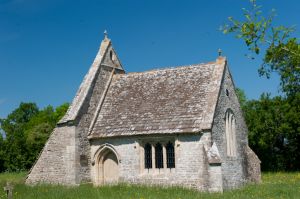 What remains of the medieval church of All Saints stands amid farm fields close to the source of the Thames. The low-lying site is subject to damp, which helps explain why the church was moved to higher ground in 1896, leaving behind only the chancel of the original church.

The nave and tower were dismantled stone by stone and reassembled in their current location in the centre of Leigh village. The core of the old chancel dates from the 13th century, with some 15th-century additions.

Leigh is part of the ancient forest of Braydon Wood, once the second-largest in England. The village is recorded as early as 1242.

The first church to serve Leigh village was erected in a low-lying field just south of the source of the River Thames. By the late Victorian period, the church was in poor condition, in part because of frequent winter flooding. The first plan was to rebuild the church but this abandoned in favour of actually moving it to its current site on Swan Lane, which made more sense as the village was based around Swan Lane already! 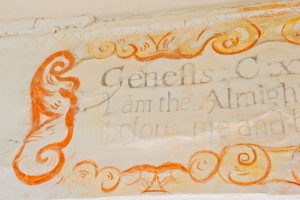 In 1896 the 13th-century nave, 15th-century roof, 14th-century porch, and 15th-century timber-framed tower were carefully taken apart and rebuilt on the Swan Lane site. The new church was not an exact copy of the old; for one thing, the porch was moved to the north side to face onto the lane.

As you approach the chancel across the churchyard you notice the 13th-century priest's door featuring carved label stops - one a carved human head, one a beast.

Inside the chancel, the first thing you notice - aside from how small space is - is the large three-light 13th-century east window. This gives wonderful light on the prime attraction at Leigh; a series of 18th-century Biblical texts from Genesis, Isaiah, and Matthew.

Each text is contained within a painted cartouche in a style known as 'rural Baroque'. There are also sections of a plaster frieze on the north and south walls. A 13th-century piscina is recessed into the side wall of the large south window, which does double-duty as a sedilia.

The simple furnishings complement the interior beautifully; there is an 18th-century communion table, Gothick style rails, and a delightful reading desk made from bits of timber from panelling in the old church.

There is a very tiny 18th-century font, returned from temporary exile at Ashton Keynes. Fonts at Leigh have a somewhat chequered history; this one was first brought to Leigh to replace the original 13th-century font, which disappeared sometime in the 16th century. In 1897 the font bowl was found serving as a cheese press in a local inn, and the stem and base were discovered during the church move. The disparate bits were then reunited in the new church.

The chancel was occasionally used, but in 1978 it passed into the care of the Churches Conservation Trust. Leigh church is usually open. and the chancel is used for two services each year, which usually take place on the last Sunday in July. Personally, I can't think of a more idyllic place to hold a summer service! 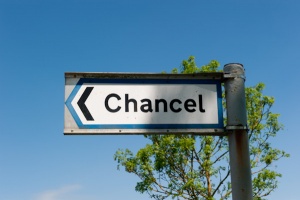 Finding the chancel is a bit of a chore. It IS signposted - if you know what to look for. There is a sign to 'Leigh Church' off the B4696 road south from Ashton Keynes, and another Leigh Church sign from the minor road from Leigh village to Waterhay.

The easiest way to describe the location is to suggest that you go to the centre of Leigh village, by the new[er] church and from there take the first lane east towards Waterhay. Immediately before the bridge at Waterhay you will see a sign to the left for the church.

Follow this until you see the 'Chancel' signpost pointing to the right. Find a place along the verge to park. Follow the signposted direction down the farm lane, through a gate, across one field, through another gate, then follow the curve of the field around to the right and the chancel will come into view through yet another gate.

The churchyard has been allowed to grow into a wildflower meadow and it is an absolute delight to visit on a sunny day in spring or summer when the buttercups are in bloom and the butterflies and dragonflies are flitting here and there. 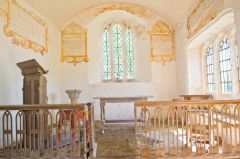 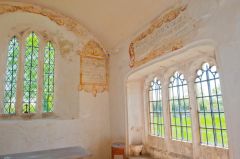 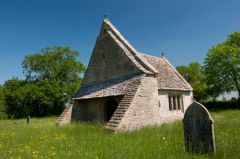 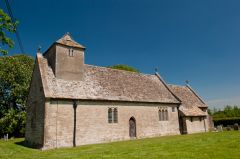 More self catering near Leigh, All Saints Church >>

More bed and breakfasts near Leigh, All Saints Church >>