Down Ampney, Gloucestershire, All Saints Church 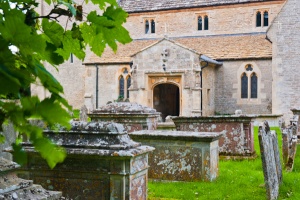 The pretty Cotswold village of Down Ampney is best known as the birthplace of composer Ralph Vaughan Williams. There is a fascinating exhibit on Down Ampney's favourite son in the tower of All Saints Church. Also within the church are tombs to members of the powerful Hungerford family although their main seat was not here, but at Farleigh Hungerford, in Somerset.

All Saints was founded by the Knights Templar in 1265, though much of its current shape is the result of a Victorian rebuilding. The striking spire dates to the 14th century, when the south porch was added. 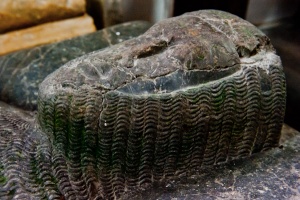 The church is notable for its excellent stained glass, much of it Victorian or modern. The interior is a symphony of woodwork, notably the intricately carved south transept screen and pulpit. The Victorian north transept screen incorporates Jacobean panelling and a coat of arms.

TEMPLAR EFFIGY
In the south transept are a pair of effigies, partly shielded by a lovely canopied niche. The closest effigy is that of Sir Nicholas de Valers (or de Valery), a Templar knight associated with the founding of the church. De Valers is clad in full armour, his hand drawing his sword, his legs crossed and resting on a curious beast, perhaps a lion.

The second effigy, partly within the niche, is that of a lady, thought to be Sir Nicholas's wife, Magaret Bassett. Unlike her warlike husband, Lady de Valers is shown in a pious pose. She must have been well-liked by the villagers, for when her husband was away at war she built a tower to safely store the villager's tools.

There are several interesting stained glass windows in the chapel; one shows a series of nautical parables. It was given to the church by Admiral Charles Talbot in thanks after his ship survived a storm off Sebastopol in 1854. The other window depicts the Resurrection Stone and is dedicated to Ralph Vaughan Williams's father. 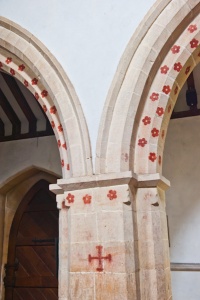 When the order of Templars was suppressed by the crown in 1315 the living of Down Ampney passed to the Abbey of Cirencester, who retained it until the Dissolution of the Monasteries, after which it passed again to Christ's Church College, Oxford.

The nave is supported on lovely pointed arches decorated with a profusion of red flowers. One theory about the flowers is that they are a reminder of the bubonic plague, when a red rash appears suddenly on the victim's skin.

The plague, or Black Death, might explain why All Saints stands at a distance from the centre of the village. It was common for villagers who survived the plague to move further away from the old village site. Further traces of red paint still cling to a 13th-century tomb recess in the chancel, possibly meant as a founder's tomb.

There are a mix of Norman and 13th-century columns in the nave. Look for the Arnhem Memorial Window, showing a Dakota aircraft. The window is a reminder that many of the airmen who took part in the Battle of Arnhem (18 September 1944) flew from Down Ampney Airfield and undoubtedly many who died that day worshipped in this church. There is an annual service every September to remember those who took part in the military operation.

HUNGERFORD CHAPEL
The north transept, or Hungerford Chapel, is enclosed within a fine oak screen. Part of the screen is made from the Musician's Gallery at Cirencester Abbey. The fragments were rather fortuitously found in a yard in Down Ampney parish and moved into the church. 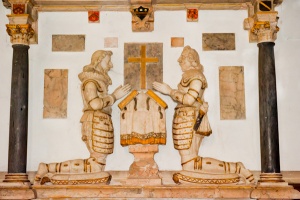 Within the chapel is a grandiose memorial to Sir James Hungerford and his son Anthony, successive lords of the manor and owners of Down Ampney House. The gilded, ornate monument dates to 1637 and shows father and son facing each other across a prayer desk in a typically pious pose.

One rather obvious element missing from the memorial is any sign of Sir James's wife / Anthony's mother. Directly opposite the memorial, rather lost in the shadows of the west wall, is a small brass plaque to Mary Berkeley, James Hungerford's first wife.

OUR VISIT
It wasn't immediately obvious where to find the church. Our satnav wanted us to stop on the main road, but we saw a sign for Church Lane and figured that looked a good bet for finding a church! There was a good parking area outside a modern lych gate, and a walk up a pleasant path where a very friendly woman was tending the graveyard.

The first thing we noticed on entering was the profusion of red flowers decorating the arches of the nave. I had never heard the theory that the flowers represent the rash that appears when plague strikes until I read the excellent church guidebook. What really struck me was the 13th century de Valers effigies and the Hungerford memorial.

The former was in such excellent condition, particularly the effigy of Sir Nicholas, and the latter was a wonderful gilded memorial of the type that the Jacobeans seemed to favour so highly. I found All Saints thoroughly enjoyable, and the setting beside the manor house is just perfect. 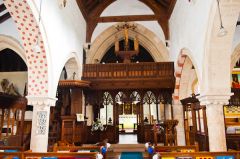 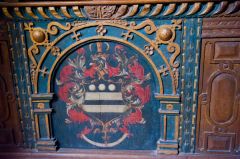 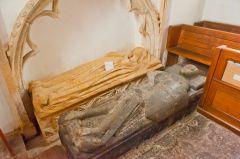 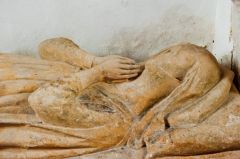 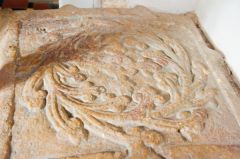 Nearest Accommodation to Down Ampney:

More self catering near Down Ampney

More Hotels near Down Ampney

More bed and breakfasts near Down Ampney