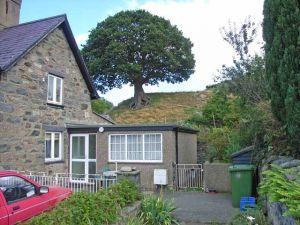 Abergwyngregyn Castle
Abergwyngregyn Castle is a simple Norman motte founded by Hugh d'Avranches, Earl of Chester, in about 1090. Today, little remains beyond a tumble of stones marking the location of a stone keep atop the motte. The castle mound was built up with boulders taken from the nearby river.
The site is thought to have been used as a ceremonial centre in the 5th or 6th century, and was later adapted by the Normans as a defensive motte. Abergwyngregan was later used by the Welsh prince Llewelyn Fawr for his royal residence, though there is no indication that his llys, or court, actually stood atop the castle mound. It is more likely that was somewhere near by.

Llewelyn's last wife, Siwan, died at Abergwyngregyn in 1237, as did their son Dafydd, nine years later. It is possibly from Abergwyngregyn that Llewelyn the Last refused to pay homage to Edward I, an act of defiance that set in motion Edward's conquest of Wales.

The mound is only 6 metres high, and roughly 40 metres diameter at the base. The flat top of the mound describes an oval about 19 metres by 16 metres.

The castle mound is on private land and permission to access the site should be obtained first. At this writing the owners are at Tyn y Mwd cottage, near the castle.

More self catering near Abergwyngregyn Castle >>