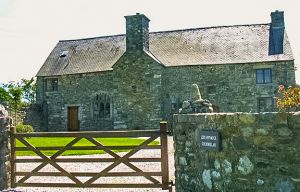 Cochwillan Old Hall
Cochwillan Old Hall is a late 15th century house, considered one of the best examples of a Welsh medieval estate centre. The almost unaltered house retains its medieval hammerbeam roof. Only the hall, solar, and buttery are on view.
History
Cochwillan was built around 1465 by William ap Gruffudd. William supported Henry Tudor in his bid for the English throne, and fought at the Battle of Bosworth in 1485. Henry rewarded ap Gruffudd for his support by naming him Sheriff of Caernarfonshire for life.

In 1620 the Hall was purchased by the 3rd Earl of Pembroke, but the Earl did not hold onto the hall and sold it on. It eventually came to John Williams, Archbishop of York, who combined it with the neighbouring Penrhyn estate. The hall fell out of use over the centuries, and was used for a time as a cattle byre and for hay storage. It was restored in 1969.

What is remarkable about the Old Hall is how much of the original 15th century building has remained intact. The most impressive feature is the hammerbeam roof of the hall, rising 30 feet high, and stretching over 3 open bays. There are massive oak screens at both ends of the hall, creating a kitchen/dining area at one end and a bedroom at the other. Look for the carved numbers used by the master carpenter to create the screen and slot pieces together. Upstairs is a solar, with views towards Puffin Island and the Menai Strait. From other windows you can see Penrhyn Castle.

One unusual feature for the late 15th century is a fireplace set into the side wall. It was much more common to see fireplaces at one end of a hall, so inserting one in the side wall would have seemed quite unusual to contemporary visitors.

The Old Hall is let to a tenant, so it can only be visited by pre-arranged bookings through the Penrhyn estate. Or if you prefer, the North Wales Path long distance trail goes right past the property, so you can view it from outside without an appointment.