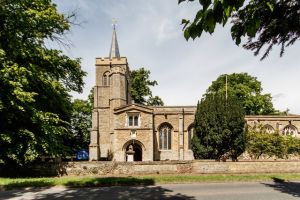 Wilburton, St Peter's Church
A 13th-century church almost entirely rebuilt in the 15th century by Thomas Alcock, a relative of the powerful Bishop of Ely. The only substantive 13th-century remains are the chancel arch, tower, and the tower arch. St Peter's consists of a nave, chancel, north and south chapels, south porch, and west tower.

The south porch is very large, with a parvise (chamber for the priest) over the entry arch. The interior is lit by huge Perpendicular windows, creating a lovely, spacious ambience. The nave ceiling is supported by a quite wonderful 15th-century timber roof.

The roof beams are supported on corbels carved to represent kings and angels, while high above, the roof bosses are carved and painted, and the spandrels are decorated with cockerels. There is also a bronze cockerel suspended from the roof, in commemoration of St Peter.

In the nave is a very large, beautifully crafted, memorial brass to Richard Bole, Archdeacon of Ely (d. 1477). Against the south wall are further brasses to William Byron (d. 1516) and his wife, and John Hyll (d. 1506) with his wife Margaret, and their 7 children.

On the north wall are much-faded fragments of medieval wall paintings, including a St Christopher and figures of St Louis, St Michael, and St George. The north transept houses a Victorian chapel to members of the Pell family.

There is a very nice 15th-century rood screen, decorated with figures of a gryphon and dragon, and a pair of Green Men.