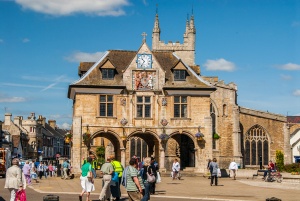 Most visitors come to Peterborough to see the 12th-century cathedral, though modern Peterborough has become something of a shopping destination also. The cathedral is something of an acquired taste, though the architecture is superb beyond doubt, the design of the west front is startling, to put it kindly. See our extended article on the cathedral here.

The city museum in Priestgate houses relics from as far back as the Roman occupation of the town, to crafts produced by French prisoners of War during the Napoleonic Wars. The portrait of a 16th-century judge is believed to be the oldest painting showing the judge dressed in his traditional robes of office.

Near Peterborough is Elton Hall, the home of the Proby family for some 350 years. Elton shows evidence of several architectural styles, from mock-Gothic to classical, and from a distance resembles a medieval castle. Inside is a wonderful collection of period rooms and fine art dating back to the 15th century. In the library is Henry VIII's prayer book.

More self catering near Peterborough

More bed and breakfasts near Peterborough