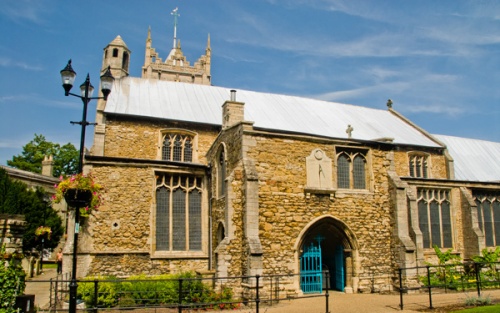 Wisbech has the air of a self-satisfied Georgian market town. Before this area of fenland was reclaimed in the 17th century the region was about as inhospitable and as unsuitable for agriculture as you could find in England. Yet the rich soil beneath the watery fens provided a great boost to the fruit and flower growing industries, and Wisbech grew in size and importance.

In the medieval period, Wisbech was an active river port, only 4 miles from the sea, but the passage of time has extended the coastline so that Wisbech now rests 11 miles from open water. Though the port has declined in importance, agriculture thrives in this corner of Cambridgeshire.

Today the North and South Brinks, facing the River Nene, is one of the most delightful Georgian areas remaining in England. The foremost attraction in amongst all these period buildings is Peckover House and Garden, presented to the National Trust by the Peckover banking family in the 1950s.

The simple exterior is unremarkable, but the interior of the house is packed with wonderful panelled rooms graced with elaborate carvings and period decoration. The walled gardens cover 2 acres of unusual and exotic plants.

Facing Peckover House across the river is the Octavia Hill Birthplace Museum, which commemorates the life of the co-founder of the National Trust. Another native of Wisbech was Thomas Clarkson, an early campaigner against the slave trade. A statue of Clarkson created by Victorian architect Gilbert Scott stands prominently near the bridge.

Elgoods Brewery and Garden are the home of a family brewing business that has made real ale here for over 200 years. The brewery hosts regular tours and beer tasting.

The Wisbech and Fenland Museum on Museum Square is one of the oldest in the UK and houses extensive collections relating to both natural and cultural history.

More self catering near Wisbech

More bed and breakfasts near Wisbech