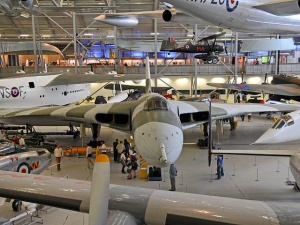 During WWII Duxford was one of the most important air bases in Britain, and planes flying from here played a major role in the Battle of Britain. Today Duxford houses the largest collection of historic aircraft in Europe, ranging from WWI vintage biplanes to Spitfires, Concorde and Gulf War jets.

The collection of planes is augmented by several special exhibits, including The American Air Museum, which boasts the largest collection of US aircraft outside America. There is also a British Aircraft Collection, Battle of Britain Exhibition, Naval Collection, Royal Anglian Regiment Museum, and tanks, trucks and artillery in the Land Warfare Hall. Finally, 'The Forgotten War' Exhibition looks at WWII in the Far East, with special attention to the war in Burma.

Duxford frequently hosts airshows and special events throughout the year. Check the museum website link in the contact details below, for event listings.

Duxford lies nine miles south of Cambridge, and regular free buses to the museum leave from Crowne Plaza and from Cambridge Railway Station in the city.

More self catering near Duxford

More bed and breakfasts near Duxford