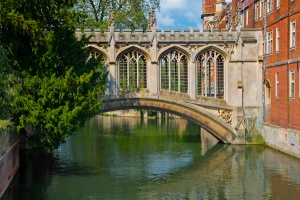 The University at Cambridge owes much to "town and gown" troubles at Oxford University. In 1209 scholars and masters escaping troubles between the university and townsfolk in Oxford began arriving in Cambridge. By 1226 the scholars had organized themselves, offered regular courses of study, and named a Chancellor to lead them.

The first great boost to the formation of a university came from Henry III, who gave the scholars his support as early as 1231. Henry decreed that only students studying under a recognised Master were allowed to remain in Cambridge.

A standard course of study consisted of grammar, logic, rhetoric, mathematics, music, geometry, and astronomy. Examinations were conducted as oral disputations or debates. Most, but not all, of the university Masters were also in holy orders of some sort. (For more on medieval universities click here.)

Rules and regulations governing behaviour and awarding of degrees were not codified until the mid 13th century. These clergy were originally under the authority of the local ecclesiastical authority, represented by the Bishop of Ely.

Like Oxford, Cambridge experienced a fair share of trouble between townsfolk and scholars. Both sides were protective of their unique rights and privileges. The university had the right to enforce laws regulating the quality of bread and ale sold in the town, and to monitor rates charged for food, fuel, and candles. 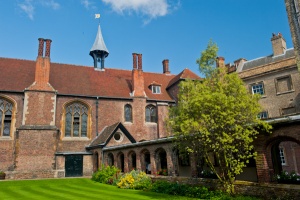 In 1381 tension between the town and university exploded into violence, with attacks on university property throughout Cambridge. The result was that even more civil authority was awarded to the University Chancellor, including the right to prosecute lawsuits arising from trade and market disputes. The university retained many of these legal rights until the 19th century.

From the 13th century, private teaching institutions, the forerunners of today's colleges, were established, most with only a few Masters and students. Peterhouse (1284) was the first college, but others soon followed. These colleges were founded by individual benefactors, not by the university as a whole.

Under the influence of Chancellor John Fisher (1509-35), the university attracted scholars from the European mainland, including Erasmus, who helped foster a climate of classical studies, religious debate, and reform that characterized the upheavals of the English Reformation.

Several prominent colleges were founded in the years following the Dissolution of the Monasteries, taking over former religious foundations. Emmanuel College, for one, took over the buildings used by a Dominican friary. This change from a religious to a secular focus was emphasized when Henry VIII took measures to forbid the study of Canon Law. Henry also established professorships in Greek, divinity, Hebrew, physic, and civil law.

Over the centuries that followed, successive monarchs and governments sought to influence which courses were taught, and the university was even compelled to award degrees to candidates put forward by the royal court.

A royal charter in 1534 gave the university the right to print books, though this right was only infrequently exercised until the late 17th century. From the 1690s Cambridge University Press enjoyed prominent status as an academic press, encouraged by the monopoly in Bible printing it shared with Oxford. 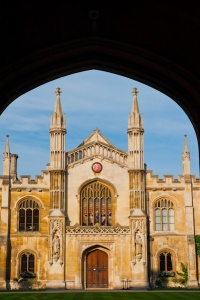 The university continued to expand, both physically and in the focus of studies. The foundation of the Fitzwilliam Museum and the University Botanical Gardens, to name just two, opened the way for the study of art, architecture, and botany at Cambridge.

Perhaps to balance this scholarly emphasis, the university encouraged student activities, notably in sporting endeavours. A boat race against Oxford University ("The Boat Race") became an annual event in 1839, as did a cricket match between the two schools. A regular intramural program of inter-college athletics began at the same time.

In the devastation following World War I, when many students and teachers died, Cambridge received regular state funding for the first time.

The 1950s and 60s saw a great expansion of facilities, with many new college buildings added or old ones expanded. Due to space problems in central Cambridge many new buildings were established much further away from the university core. Much of the teaching emphasis was on the sciences, and as a consequence, the Cambridge area became a centre for scientific industry, fueled by research at university laboratories.

CAMBRIDGE UNIVERSITY TRIVIA
Peterhouse, founded in 1284, is the oldest college at Cambridge.

Students began university at the tender age of 14 or 15, and it took 7 years to graduate.

University courses of study are known as "tripos" after the three-legged stools used by BA candidates in the Middle Ages.

Until 1869 Cambridge was only open to men. Girton College was founded for women in that year, to be followed two years later by Newnham. There are now no men-only colleges.

Cambridge has a tradition of each college maintaining a chapel choir. Students can receive scholarships for musical skills, and most college chapel choirs maintain a regular program of choral concerts.