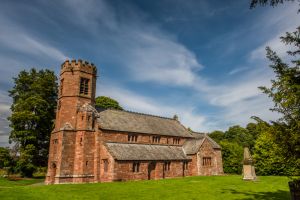 There was a church at Wetheral in the 11th century, associated with nearby Wetheral Priory. Nothing now remains of that early church, and the current building of red sandstone dates to the 13th century, though much was rebuilt in the early 16th century.

The building consists of a nave, vestry, chancel, south porch, chapel, east bellcote, and west tower. The first thing you notice about Holy Trinty and St Constantine's is the tower, which rises from a rectangular base to a hexagonal top surmounted with parapets. The tower stands on the site of a medieval porch, and dates from 1790, with the top rebuilt in 1882.

The association of the church with Wetheral Priory is commemorated with a pair of inscriptions found at the priest's door and west window to priors William Thornton (1500-1530) and Richard Wedderhall (1534-1539).

Within the church, the most interesting historical features include the 13th-century font and a tomb chest with effigies to Sir Richard and Dame Jane Salkeld, dating to about 1500.

However, the main interest at Wetheral is to be found on the north side of the chancel, where in 1791 a Gothic-style chapel was built over the mausoleum of the Howards of Corby Castle, located just across the river from the church. The chapel was built by Henry Howard to house a fantastic memorial to his wife, Lady Maria Howard, who died tragically in childbirth at the age of only 22.

Henry Howard employed the sculptor Joseph Nollekens to create a life-sized likeness of his wife in white marble, carrying the dead infant in her lap. Lady Howard is shown supported by a figure of Faith, whose free hand points to the sky.

Nollekens considered this his greatest work, and he is reported to have wept when he learned that his work was to be hidden away in a private chapel. The sculptor's own gravestone shows him creating the memorial, and William Wordsworth was moved to write a sonnet to the Howard Memorial.

Within sight of the church is the gatehouse of Wetheral Priory, all that remains of the medieval foundation. 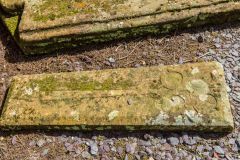 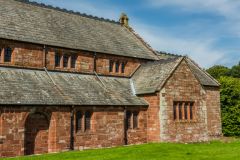