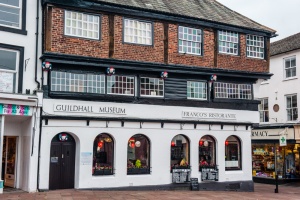 The Guildhall is one of Carlisle's medieval treasures, dating to at least 1405 when it was built by Richard of Redeness. Redeness left the building to the city when he died, and it acted as the administrative centre for city government.

There were eight separate guilds in Carlisle (Merchants, Skinners, Tanners, Butchers, Shoemakers, Smiths, Tailors, and Weavers), and each guild had a separate meeting room. Each guild room has its own character and hosts exhibits relating to the history of the city and the guild, including guild silver.

Within the museum are displays outlining the city's history, including stocks used for punishing criminals, the chest which kept the city's valuables safe in the Middle Ages, and two bells from the Elizabethan period that were awarded as prizes for horse racing.

The ground floor of the Guildhall building has a series of rounded windows, reminiscent of an open ground floor that has been filled in, as happened with many medieval market halls. There is no evidence to suggest that the ground floor was ever open, however.

The upper floors project out over the ground floor, a typical style in medieval timber-framed buildings. The interiors feature original wattle and daub walls separating the rooms. Look for the amusing painted carvings on the outside of the Guildhall!

The Guildhall stands in the market place, near the tourist information centre, and is well signposted from the city centre and all the major attractions. 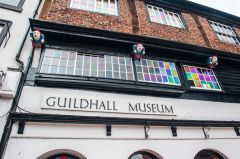 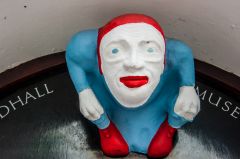