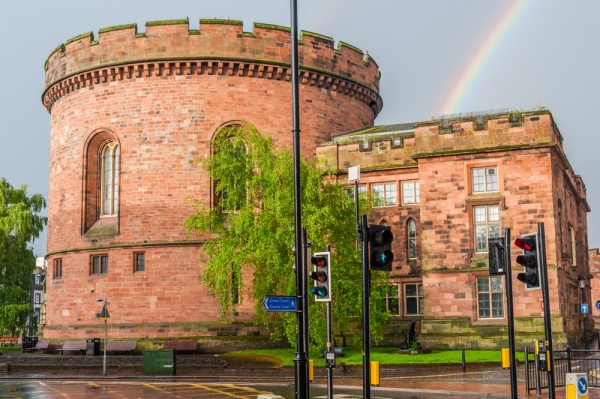 A rainbow over the western tower of The Citadel

One of Carlisle's most iconic set of historic buildings is The Citadel, located at the southern end of the medieval city walls. The Citadel dates to 1541 when Henry VIII ordered it built to replace the medieval Botcher Gate.

The Citadel was built to a design by Stephen von Haschenperg, a military engineer from Moravia. The original medieval gate was blocked up, and a pair of gunports built in the former gateway opening. Curtain walls were built to connect the towers to a pair of large bulwarks, each two storeys high and 60 feet across. The tower walls were massive, measuring 12 feet thick. A third tower was built to hold artillery, and casements to mount the guns were built within the two main towers.

A new gate, called the English Gate, was built beside the new Citadel buildings to the north and a bastion wall stretched between the two towers. 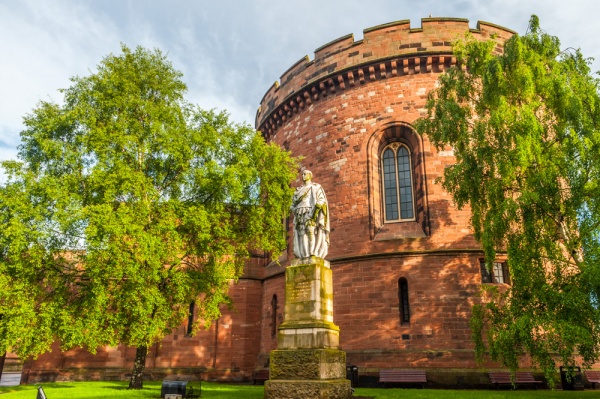 The Citadel was finished in 1542. but it was not until 1545 that it was supplied with artillery. The guns were badly needed, for it was reported that between the castle and the Citadel there was just one aged gunner. The citizens of Carlisle were so alarmed by this sorry state of affairs that they offered to pay for the artillery themselves. Not surprisingly, Henry VIII agreed to this plan. To be fair to Henry, he then provided a garrison of 500 men to man the city's new defences.

One has to wonder about Henry's priorities though; when the guns were finally installed they did not pint south towards England, but north over the city itself. The message was clear; if the Scots invaded Henry was quite prepared to destroy Carlisle rather than see it in Scottish hands.

The Citadel was converted to use as a gaol in 1611 after the old county goal became so decrepit that 28 out of a total of 33 prisoners managed to escape. Clearly the city needed a new gaol, and the Tudor Citadel fit the bill.

Much of the Tudor fortress was demolished in 1810 to make way for the present pair of round towers, designed by Thomas Telford and completed under the supervision of Sir Robert Smirke. The only part of the towers to survive from the Tudor defences is the lower section of the eastern tower.

The west tower housed criminal courts and the east tower was home to the civil courts. 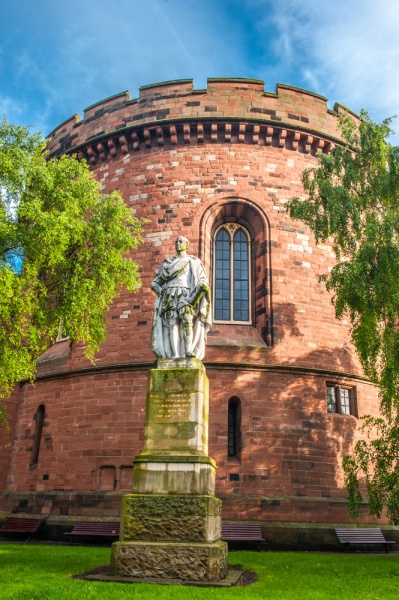 In 1827 a new county gaol was built, and it continued in use until 1927. Connected to the gaol was the Crown Court, which stayed in use until 1996 when new court buildings were erected on Earl Street. The space was then used as offices by the Cumbria County Council.

At the heart of the old gaol quarters is the condemned prisoner cell, where prisoners sentenced to be executed spent their final night. From the cell the prisoner was marched up a set of steps inside the Citadel to the gallows set up on the roof, and there they would be publicly hanged, watched by a crowd gathered below.

Condemned prisoners had up to 21 days to appeal their sentence, so in theory, they could spend three weeks in the condemned cell - not a pleasant way to spend your time. The last person to make that fateful walk up the stairs to the gallows was William Charlton, condemned to hang for murder in 1862. After that time executions took place in private, within the Citadel itself.

The area once occupied by the main prison is now occupied by a council building erected in the 1960s. 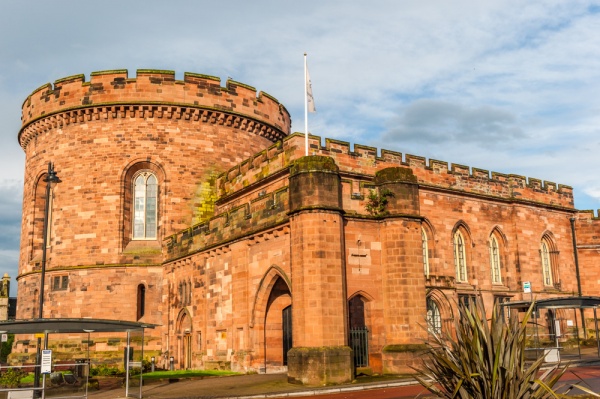 Under the old courtrooms is an exhibition on the Netherby Hall burglary, one of the most notorious crimes ever committed in Cumbria. Netherby Hall was a large house in Longtown, not far north-east of Carlisle In 1885 a trio of burglars broke into the Hall and stole a collection of jewellery. The police chased the burglars, and in the pursuit, one policeman was killed and two more injured by gunshots. The three burglars were eventually caught and sentenced to die for murder. They were executed in the Citadel in February 1886.

You can walk up the staircase that ked from the prisoner cells to into one of the courtrooms. One curiosity in the courtroom is a wooden hood over the place where the accused person stood. this was erected to protect the accused from any missiles thrown by watchers in the public galleries above the courtroom.

Public tours of the Citadel can be booked through the tourist information centre in the Market Square. Both towers can be viewed, and special evening group tours can be arranged.

The Citadel was in the news in 2016 when Cumbria County Council published plans to develop the Citadel buildings into a complex including a hotel, a restaurant, a supermarket, shops, and flats.

Nearest Accommodation to The Carlisle Citadel:

More self catering near The Carlisle Citadel

More Hotels near The Carlisle Citadel

More bed and breakfasts near The Carlisle Citadel