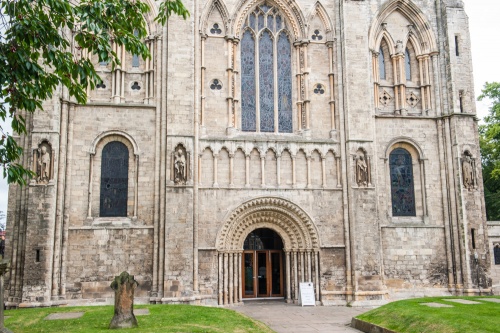 Selby Abbey was the very first abbey to be established in the north of England following the Norman Conquest. Those must have been nervous times for the builders, as the north was not quick to acknowledge the new Norman authority. The abbey church survived the English Reformation to become the parish church, and we should be grateful that it did, for Selby is a rare and beautiful building.

The foundation of the abbey deserves a mention; according to the traditional story, the church was founded by a French monk from Auxerre named Benedict, who received a vision from St Germanus (St Germain). The saint told him to journey to 'Selebaie' and build a monastery where he saw three swans. Benedict went first to Salisbury, then to King's Lynn, before fetching up at Selby.

There, as he rested by the banks of the River Ouse, three swans came ashore. So Benedict built his monastery at Selby and dedicated it to St Germain (the full dedication is to Our Lord, Our Lady and St Germain).

The highlight of the abbey interior is undoubtedly the east window, with its extraordinary collection of 14th-century stained glass. This glass is arranged to show the traditional family tree of Jesus, in the fashion known as a 'Jesse' window. This is the largest Jesse window in England and is such a local treasure that when a fire broke out at the abbey in 1906 a special fire crew was sent to keep the window wet with water and safe from the heat of the flames. 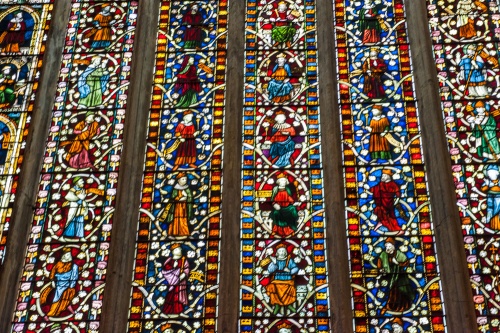 A few feet away from the Jesse window is the so-called Selby Imp, a deliciously devilish carved figure decorating a column capital on the south side of the sanctuary, to the south of the altar. Immediate south of the altar is a magnificent 14th-century sedilia, with four seats rather than the usual three. This and the remainder of the chancel architecture is thought to have been crafted by Henry Yevele, the first known professional architect in England, and the man largely responsible for the nave of Westminster Abbey.

High above the chancel in the south clerestory is the so-called Washington Window, after a coat of arms of an ancestor of American president George Washington. The 14th-century Washington coat of arms contains three stars above red and white stripes and is one of the first known representations of the stars and stripes pattern later used for the US flag.

The window is thought to commemorate John Wessington, Prior of Durham (1416-1446). Because the Washington connection, Selby Abbey is on the 'American Trail' of attractions around the UK with strong American historical connections. Another of Selby's treasures is the Germanus Window in the north transept; where superb early 20th-century stained glass tells the story of the life o St Germanus. 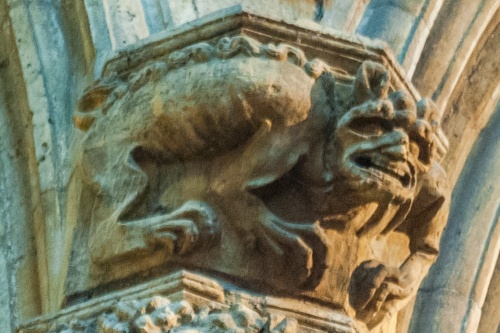 In the north aisle is the Ellerton Window, with lovely 14th-century stained glass rescued from Ellerton Priory. Nearby are grave slabs to three of Selby's medieval abbots; the earliest is that of John de Shireburn (d. 1408).

Further along in the north aisle is a very narrow leper's squint, allowing lepers the chance to see the high altar from outside the main church building. At the west end of the nave are effigies to Margery and Hgh de Pickworth - note how short the effigies are, particularly that of Margery. Near the effigies is a very simple Norman font in chalice style.

The administrators of the church have done a wonderful job with signage for visitors, and most of the interesting historical features of the church are well explained. Selby Abbey is a superb medieval church, one of the finest in the north of England, and is well worth a visit. 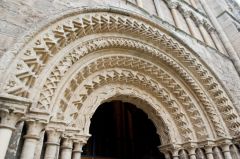 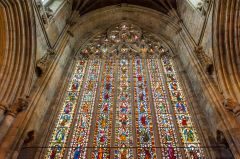 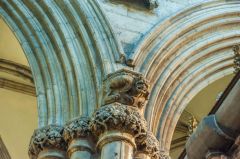 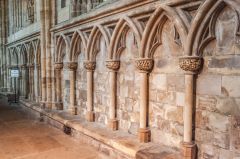 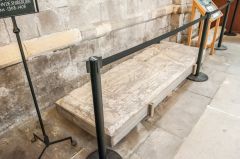 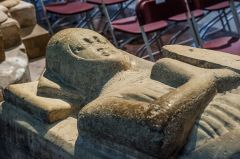 More self catering near Selby Abbey >>