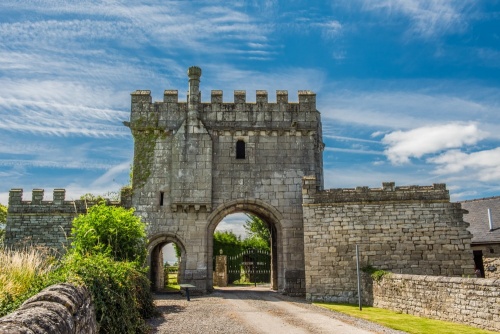 Steeton Hall Gatehouse is a very well-preserved Grade I listed 14th-century gateway built for the manor of Steeton Hall. The gateway was built around 1360 and is two storeys high, with a central arched passage and a smaller side passage. It is ornately crenellated and decorated with heraldic shields, coats of arms, and grotesque gargoyles. The gateway is joined to solid curtain walls.

The gateway is built from large limestone blocks upon a huge plinth. A spiral stair gives access from the first floor, housing a large chamber and a small garderobe chamber. One of the chambers above the gate passage was later converted for use as a pigeon loft. From the first floor, the stair rises to the battlements. The short sections of battlemented walls on either side of the gateway are later additions.

At first-floor level is a striking chimneystack, with an octagonal chimney supported by four stone corbels decorated with carved heads. A row of corbels supports the crenellated parapet, with a wonderful array of heraldic symbols of local families.

Among the heraldic devices are the symbols of the Reygates, the Malbis, the Harengills, and the personal arms of John Thoresby, the Archbishop of York from 1354-1373. This display of heraldic carvings is one of the most impressive features of the gateway.

The Reygate family held the manor at Steeton from the middle of the 13th century. They purchased the estate from the barony of Sherburn in 1261. The manor dates to around 1342, when William de Reygate, the royal administrator Escheator for the county of York, received a license to crenellate from the king. The Hall stood at the centre of a large manorial complex with a variety of other buildings, a fishpond, stables, workshops, staff lodgings, and kitchens.

Near the Hall are the remains of garden terraces. The precinct wall survives as a low earthwork bank with small sections of visible stone walls. One side of the manorial precinct was bounded by an enhance stream bed cut to resemble a moat. A section of stone wall near Steeton Cottage has arched bee boles built into it. These are small alcoves built to shelter beehives from the weather.

After the Reyton family occupation, the manor seems to have lapsed into decay for many years until it passed to the Foljambes in 1642. The Foljambes held the manor for over 3 centuries and during their occupation, the hall was extended and a complex of farm buildings erected. These 17th and 18th-century buildings reused stone from the earlier medieval buildings.

The gateway passed into state care in 1948 and is now cared for by English Heritage. The Hall is now a private dwelling, and though it incorporates medieval sections of the old hall, much of the current structure dates from the 17th and 18th centuries. 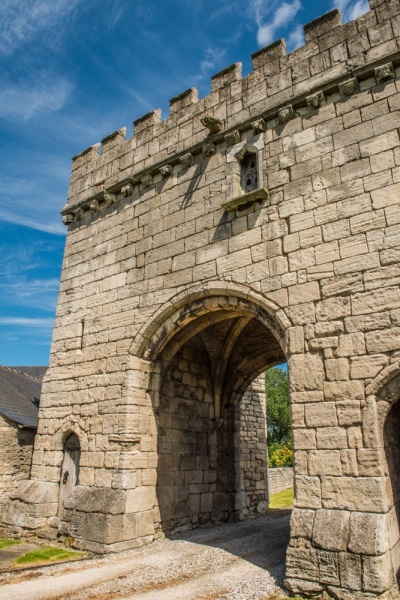 The back of the Gateway

The gateway is not well signposted. In fact, I didn't see any signs on nearby roads until I reached the turn to Steeton Hall itself. 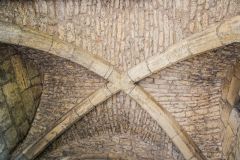 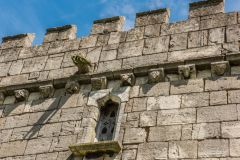 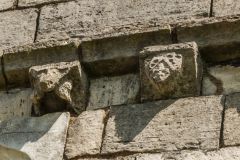