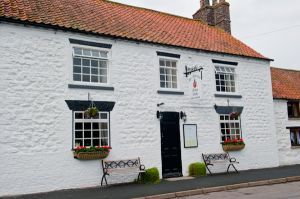 Harpham
Harpham village is set in lovely countryside between Driffield and Bridlington. This small, peaceful location has a rich history. In a field beside the church (just behind the tennis courts) a few bumps and hollows in a farm field shows the location of a medieval manor built by the St Quintin family.

There are not one, but two famous wells in Harpham. In the field by the manor site is Drummer Boy Well, an artesian well rising from a circular stone well shaft about four feet in diameter. The name of the well commemorates the unfortunate death of a drummer boy. There are two legends telling how the unfortunate boy met his end; one condemns the St Quintin lord of the manor, the other is more 'St Quintin friendly'.

According to the first story, William the Conqueror promised to grant the manor of Harpham to whoever reached it first. The quickest to arrive was a drummer boy, but close behind was a St Quintin, who, anxious to claim the land for himself, threw the boy down the well, where he died by drowning. Since that time a sound of drumming can be heard emerging from the well whenever the head of the St Quintin family is about to die. 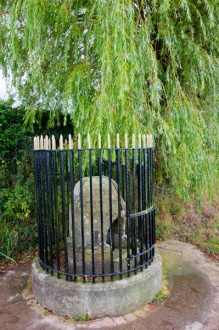 A second, kinder version of the story tells that the St Quintin lord of Harpham manor was watching an archery tournament in the field when he accidentally jostled a drummer boy, who lost his balance, fell into the well, and was drowned. Though it was clearly an accident, the spirit of the little boy returns to beat his drum at the approaching death of a St Quintin family member.

Which tale is true? We'll never know, so you can take your pick.

A second historic well is at the western edge of the village at the end of a farm road. Immediately beside the road, shaded by a willow and protected by iron railings, is a well associated with St John of Beverley, who was born in Harpham in AD 640.

The well is said to have magically sprung forth from the ground when the saint struck the ground with his staff. Local tradition says that the well water is useful for curing headaches and eye issues, overcoming fertility, and helping calm animals. If you want to try the cure you're out of luck, for the water is inaccessible due to the railings.

The parish church of Harpham is well worth a look; it was built by Sir William St Quintin in the 14th century and contains some very fine memorials to members of the family, including an excellent pair of medieval brasses (hidden under floor mats in the north chapel). 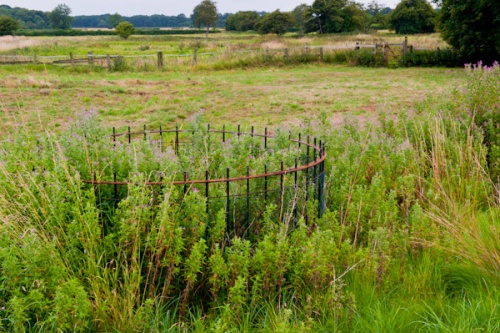 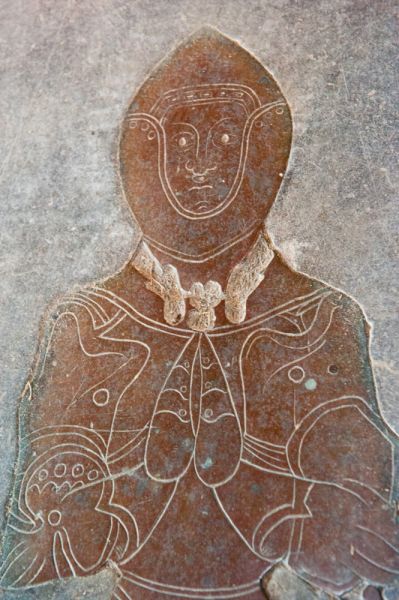 A medieval St Quintin brass in the church

More self catering near Harpham >>

More bed and breakfasts near Harpham >>